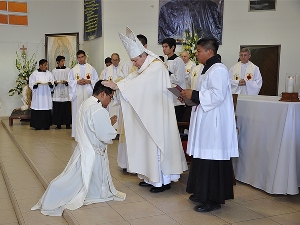 The Congregation of Holy Cross in Mexico celebrated the Ordination to the Presbyterate of Rev. Carlos Jacobo de los Santos, C.S.C., on December 8, 2012. Fr. Carlos was ordained by Bishop Jorge Cavazos Arizpe, the Auxiliary Bishop of the Archdiocese of Monterrey, at Nuestra Madre Santísima de La Luz Parish in Guadalupe, Nuevo Leon.

La Luz Parish is located in an urban, impoverished section of the greater Monterrey metropolitan area. The parish serves over 30,000 people, including Fr. Carlos’ own family.

While he was born in the central part of the country, Fr. Carlos was raised in the parish. In fact, the kindergarten where Fr. Carlos once attended school is now a neighborhood chapel belonging to the parish. His parents and brothers still live in the parish today. 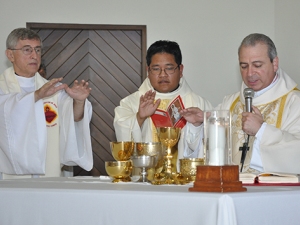 Rev. John Herman, C.S.C., Pastor of La Luz Parish, said that now the tables are turned. It is Fr. Carlos who today inspires and serves others. According to Fr. Herman, the ordination of a “son of the parish” has been very encouraging to many of the parishioners. “This means a lot to the people,” said Fr. Herman, “because one of their own is now el Padre (or ‘the priest’) and will celebrate Mass for them and hear their confessions.”

Fr. Carlos is the fourth Holy Cross priest ordained in Mexico and is among five finally professed Mexican members of the Congregation.

Following his Ordination, he is returning to St. John Vianney Parish – a parish administered by the Congregation in Goodyear, Arizona, in the United States – where he had been serving as a deacon.