From December 13-15, the General Council of the Congregation of Holy Cross gathered for its second meeting under the leadership of Fr. Robert L. Epping, C.S.C., Superior General. As with the Council's first meeting, this meeting took place at the Congregation's Generalate in Rome, Italy. 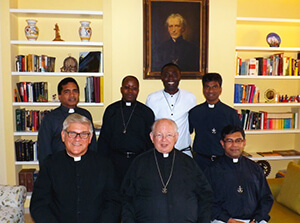 In addition to its standard business, one of the main topics of the General Council meeting was planning the first meeting of the Council of the Congregation under this new General Administration, which will take place January 9-13, 2017, at the De La Salle Christian Brothers Generalate in Rome.

In its December meeting, the General Council also received a report on the visit of Br. Paul Bednarczyk, C.S.C., Vicar General and First General Assistant, Fr. Abraham Kochupurakal, C.S.C., Second General Assistant, and Fr. Gaspar Selvaraj, C.S.C., General Steward, to the International Shrine of Blessed Basile Moreau in LeMans, France. They met with the Shrine’s Rector, Fr. John DeRiso, C.S.C., and Fr. Romuald Fresnais, Superior of the Vicariate of France, to review the great work and ministry of the Shrine as well as to begin deeper planning for its future.

The Council also discussed the current status of the causes of Blessed Basile Moreau and the four Holy Cross Servants of God: Fr. Patrick Peyton, C.S.C., Br. Flavian LaPlante, C.S.C., Bishop Theotonius Ganguly, C.S.C., and Archbishop Vincent McCauley, C.S.C. The Council decided that the priority at this time will be the promotion of devotion to Blessed Basile Moreau and his cause for canonization. 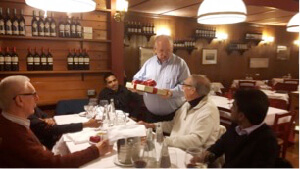 The General Council also had a chance to recognize the service of Br. Edward Dailey, C.S.C., a member of the Midwest Province (Notre Dame, Indiana), who has been the General Secretary of the Congregation since 1986. His service in the Genearlate has spanned three different Superior Generals. Having completed faithfully this work in Rome, Br. Dailey now has accepted an assignment to Bangladesh where will teach English to the Holy Cross aspirants and reside with the St. Gregory’s Brothers Community.

Read about the 2016 General Chapter's vision

All in all, they were three busy, yet productive days of meetings for the new General Council.

"The General Chapter gave the new General Council several challenging mandates, but with trust in Divine Providence and with the support of the Council of the Congregation and the membership at large, we will create together a vibrant future for Holy Cross," said Fr. Epping.