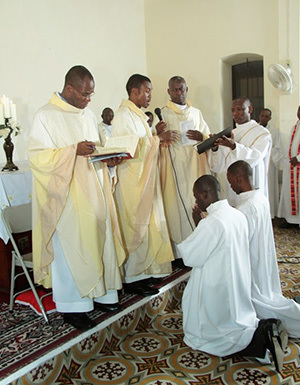 December was a time of celebration for the Congregation of Holy Cross in Haiti. On Saturday, December 20, 2014, Icemick Jean-Baptiste, C.S.C., and Mikely Jn-Simon, C.S.C., made their Final Profession of Religious Vows in the Congregation. The following day, Sunday, December 21, both men were ordained deacons. In that same Mass, Fr. Jacquy Dagobert, C.S.C., was ordained a priest.

The Mass of Final Profession on December 20 was held in St. Joseph’s Chapel in Cap-Haitien, Haiti. Fr. Michel M. Eugene, C.S.C., the Superior of the Our Lady of Perpetual Help Province (Port-au-Prince, Haiti), presided and preached at the Mass. He also received Icemick and Mikely’s vows.

In his homily, Fr. Eugene drew from Pope Francis and focused on the reality of “joy,” exhorting the two men to give joyful witness through their religious life and ministry.

“There is no sadness in holiness. There is not even a sadness in the spirituality of the cross. … This deep sense of joy comes from the call. We tell ourselves deep within ourselves that Jesus loved us and called us. … We are glad because, as St. Paul says, “It is no longer we who live, but Christ who lives in us.’” 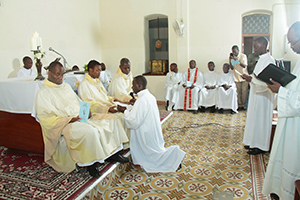 Following the Mass, a reception was held in the Collège’s residence. Many members of Icemick and Mikely’s families were present, as were their fellow religious in Holy Cross. They were also joined by other friends and religious priests, brothers, and sisters.

The next day, Sunday, December 21, the Congregation gathered in the Parish of Saint Pierre et Saint Paul in Limbe for the diaconal ordinations of Icemick and Mikely as well as the priestly ordination of Fr. Jacquy. The Mass was held in Limbe as that is where Fr. Jacquy is from. It is also the site of a large educational mission of the Congregation. All three men were ordained by the Most Rev. Yves-Marie Pean, C.S.C., Bishop of the Diocese of Gonaives.

“Having workers for the harvest is great for our province in Haiti because ‘the harvest is great,’” said Fr. Michelet Labbé, C.S.C. “The Province of Our Lady of Perpetual Help in particular, the Congregation of Holy Cross, and the Church in general are happy to have men like Jacquy, Mikely, and Icemick who are completely at the service of the Lord. We thank them and their parents, not forgetting the Lord who has called them.” 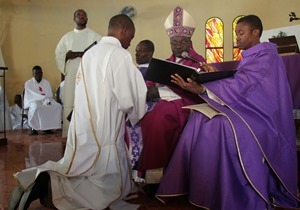