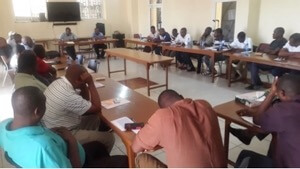 From December 26-29, 2017, the Congregation of Holy Cross in Haiti, which is organized into the Province of Our Lady of Perpetual Help, gathered in Cap Haitian for a Province Assembly. Holy Cross brothers and priests from across the country gathered at the Residence at the College Notre-Dame du Perpétuel Secours, which is the apostolate that first drew Holy Cross missionaries to the Caribbean nation in 1944.

The theme for the Assembly, which serves as part of the preparations for the Province’s Chapter later this year, was chosen by the Provincial Superior, Fr. Eric Jasmin, C.S.C., and his council: “Let us unite to build the future” (Unissons-nous pour bâtir l’avenir). Fr. Jasmin opened the Assembly with an initial address, offering words of welcome and setting the tone and context for the days to follow.

Two main themes were addressed: Fraternal and Community Life, and Governance and Leadership. Essentially, one day was dedicated to each major theme, with Fr. Dudley Mocombe, C.S.C., chosen to serve as the moderator. 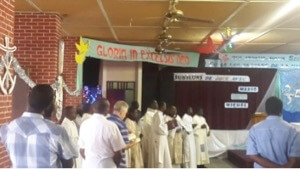 To help lead the community in its reflections, the Province invited Fr. Charles Joseph, O.M.I., to offer his thoughts and perspectives on the two major topics. He shared from his own experiences in his own religious community of the Missionary Oblates of the Mary Immaculate. A great conversation followed among the members of the Province, both in small groups divided up by the region of the country in which the religious work as well as in plenary sessions.

Each day, in the spirit of the Congregation's Constitutions the community gathered to celebrate Laudes and Vespers, as well as the Eucharist. They also shared the common table at their meals.

The third and final full day of the Assembly was particularly special, as the Province took the opportunity to celebrate the silver jubilees of Ordination of three of the Province’s priests: Fr. Charles Joseph Mehu, C.S.C., Fr. Mario Philippe Barthélemey, C.S.C., and Fr. Michel Martin Eugene, C.S.C. All three were ordained on January 10, 1993. 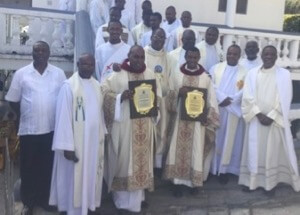 Unfortunately, Fr. Mehu was unable to attend in person, as he continues to recover from surgery, but he shared in the spirit of the celebration, which drew many of the jubilarians’ friends and family. A beautiful feast followed the festive celebration of the Eucharist.

Later that same afternoon, Fr. Jasmin offered a closing address, in which he drew the focus of the Province to some aspects regarding its mission and ongoing training. He also invited the members to reflect on the road to the future by taking the path of unity.

All in all, in the words of Deacon Luc-Franck Jean-Pierre, C.S.C., who serves as the Province’s Executive Secretary, “It was a highly fraternal moment in the life of the young Province of Our Lady of Perpetual Help.”

Special thanks to Deacon Luc-Frank Jean-Pierre, C.S.C., for his help with this article.