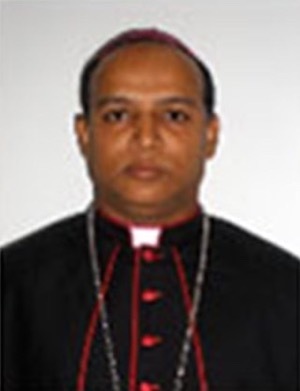 On Tuesday, December 29, 2015, the Holy See announced that Pope Francis had erected a new diocese in Bangladesh and appointed the Most Rev. Lawrence Subroto Howlader, C.S.C., as its first bishop. The new Diocese of Barisal is being created from territory of the current Diocese of Chittagong. Most recently, Bishop Howlader was the Auxiliary Bishop of the Diocese of Chittagong.

“Bishop Howlader has served the Church and the Congregation very well over the years. He is a spiritual leader and will meet the challenges of serving the people of the Chittagong Hill Tracts well,” said Fr. Richard V. Warner, C.S.C., Superior General of the Congregation of Holy Cross. "We offer Bishop Howlader our prayers and best wishes as he assumes his new service to the Church"

The Diocese of Barisal covers an area of 20,708 square kilometers. Out of a population of over 15 million, only 29,685 are Catholics. The cathedral of the new diocese will be the Church of St. Peter in Barisal, and its patron will be St. Peter the Apostle.

The new diocese is territory well-known to Holy Cross as the Congregation has ministered in the region since 1853. Within the Diocese of Barisal are the Chittagong Hill Tracts, a most challenging area where there are few roads and much of the travel must take place on foot. Holy Cross evangelized the tribal peoples of the region, and the fruits of these missionary efforts are seen in the vibrant Christian communities that exist today.

Holy Cross has a large center for pastoral leadership in the new diocese, as well as one parish. The new diocese is also home to the Congregation’s Novitiate in Bangladesh, which is in Sagardio. The Novitiate serves both the Holy Cross priests (in the Sacred Heart of Jesus Province) and the Holy Cross brothers (in the St. Joseph Province).  In fact, Bishop Howlader was serving as the Director of Novices at the time of his appointment as Auxiliary Bishop of the Diocese of Chittagong. 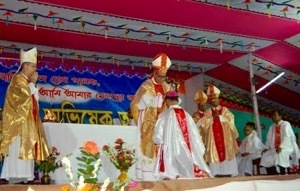 Bishop Howlader is a native of the new diocese, having been born in Nobogram, Barisl. He joined the Congregation of Holy Cross in 1987 and took his first vows in 1988 and then final vows in 1993. He was ordained priest in 1994. His pastoral work includes serving in three parishes, and he has a Licentiate in Depth Psychology, Spirituality, and Counseling from the Gregorian University, Rome. In 2009, Pope Benedict XVI appointed him the Auxiliary Bishop of Chittagong Diocese.