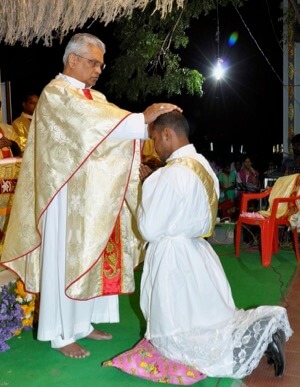 On January 27, the Congregation’s Vicariate of Tamil Nadu celebrated the Ordination of Fr. Ignaci Santiago, C.S.C., in his native village of Savariar Samuthiram in Rammad District. The Most Rev. J. Susaimanickam, Bishop of the Diocese of Sivagangai, was the ordaining bishop.

After the ordination Mass, a reception was held for the many Holy Cross confreres, local religious and clergy, family, friends, and parishioners in attendance.

The following day, Fr. Ignaci celebrated his first Mass in his home parish, St. Ignatius of Loyola, the name Fr. Ignaci was given at his baptism.

This particular region of India has been a fertile region of vocations for the Congregation. Fr. Ignaci is the second Holy Cross priest to be ordained from his village and the third from the wider parish. One of those three is Fr. Justin Diraviam, C.S.C., Superior of the Vicariate of Tamil Nadu. 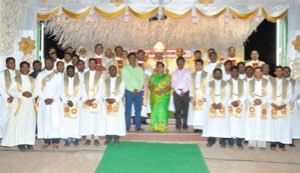 From the Diocese of Sivagangai, there are already 12 Holy Cross priests, who are working in various sectors within the Congregation not only in India, but around the world. For example, both Fr. Vijay Amirtharaj, C.S.C., the Superior of the Region of English Canada, and Fr. Gaspar Selvaraj, C.S.C., the General Steward, hail from the Diocese of Sivagangai.

This number will only increase in the future, as there are a number of seminarians in the pipeline for Holy Cross from the Diocese, including two to be ordained in 2019.

For his first assignment as a priest, Fr. Ignaci has been sent to Kadayam Parish community where he will serve as Assistant Pastor.

Fr. Ignaci's ordination is just the first of the five ordinations scheduled for 2018 for the Congregation of Holy Cross India. The four other men who professed Final Vows with Ignaci and were ordained deacons back on October 5 and 6, 2017, will be ordained to the Priesthood later this year. 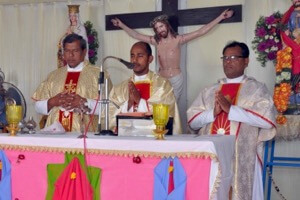 “Ignaci's ordination gives us a great hope to expand our ministries in the Vicariate, especially the when the last chapter has mandated to take up some parishes to be run by Holy Cross,” said Fr. Justin. “With Ignaci's Ordination and the remaining two for the Vicariate of Tamil Nadu in May 2018, we will be able to take up parish ministries which are cradles for the vocations to Holy Cross.”

Special thanks to Fr. Justin Diravaim, C.S.C., for his assistance with this article.