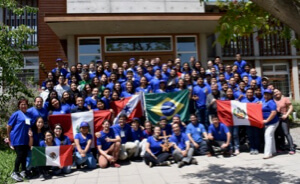 From October 17-22, over 120 young people and their leaders gathered in Santiago, Chile, for the second Holy Cross International Youth Gathering for the Americas. The theme was Enviados por Cristo como Signos de Esperanza – “Sent by Christ as Signs of Hope.”

The first gathering took place two years ago, July 24-31, 2017, in Lima, Peru, and drew over 50 young people, including 24 foreigners. This year’s gathering more than doubled the first one, witnessing a more than threefold increase in the international participants.

The largest international contingent came from Brazil, with a total of 46 pilgrims coming from two of the District of Brazil’s schools: Colégio Don Amando in Santarém, Pará, and Colégio Notre Dame in Campinas,São Paulo. In addition to teachers from the schools, the Holy Cross religious accompanying them from the District of Brazil were: Fr. José Paim, C.S.C., Mr. Valman Fernandes Barbosa, C.S.C., and Mr. Antonio Wanderley Oliviera de los Santos, C.S.C. 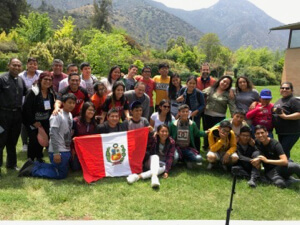 The other large international contingent came from Peru, with a total of 42 pilgrims. The majority of them came from two of the Congregation’s apostolates in Canto Grande on the outskirts of Lima: Señor de la Esperanza Parish and Fe y Alegría 25 School. Accompanying them were Fr. José Luis Tineo, C.S.C., Pastor of the Parish, and Fr. John Phalen, C.S.C., Assistant Superior and Vocation Director of the District of Chile-Perú.

The other Peruvian pilgrims came with Sr. Yolanda Lanza Cruz, C.S.C., from Tacna in Southern Peru. They are members of the group of Missionaries of the Sisters of Holy Cross.

The remaining international pilgrims came from the United States: two from St. Adalbert’s Parish in South Bend, Indiana, and two from the formation programs of the United States Province of Priests and Brothers, including professed seminarian Mr. Cameron Cortens, C.S.C. 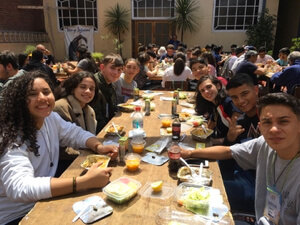 Also participating in the Youth Gathering were the men in formation of the Santa Cruz House of Formation in Chile. The formation house served as the home for the pilgrims during the week, with over 110 people camping out in the house during the gathering. The men in formation helped with all facets of the gathering, from accompanying the pilgrims to planning and leading liturgies, from cooking in the kitchen to washing dishes and cleaning bathrooms.

The protests over social injustices, and subsequent violence, that broke out in Chile on the afternoon on Friday, October 18, required some changes in the initial plans for the gathering. Most notably, the Pilgrimage of St. Teresa of the Andes, which draws between 20,000 to 30,000 youth yearly to retrace the walk made by Chile’s first saint, was canceled. 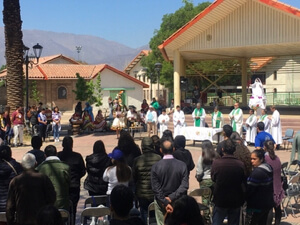 Yet, through the dedication and creativity of lay collaborators and Holy Cross religious who made up the Organizing Committee, as well as the patience and generosity of the various group leaders, the gathering was able to fulfill its mission of giving the young people the opportunity to come to know the international Family of Holy Cross, to share their experiences of spirituality and mission in Holy Cross, and to be sent out as protagonists of the Good News of Jesus Christ in the Church of today.

Learn about the mission of Holy Cross

In the words of the group from Tacna: "We arrived with many expectations, and we all left believing that what we had lived exceeded our expectations. The gathering was exciting, fun, and full of faith in the experience of coming to know many cultures of the countries in Latin America and the United States that share our same Holy Cross spirituality. 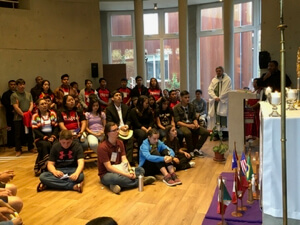 "We take with us from this gathering, to share with our brother and sister missionaries, the experiences that we have been able to witness these days," they continued. "We also carry the message of continuing to bring the Good News to Tacna. Gatherings like this one are what inspire and encourage us to continue this work of the mission of Blessed Basil Moreau."