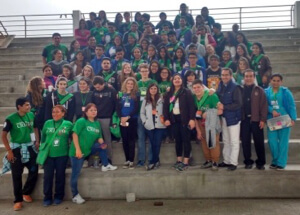 They were joined by Holy Cross novices, sisters, brothers, and priests for a jammed-pack week of events, including prayers, workshops, missionary work, and celebrations.

“The purpose of this encounter was that the young people would feel connected with the charism of the Congregation and realize that they are not alone and what they have in common is being part of the mission of the Congregation in the world,” said Fr. José Luis Tineo, C.S.C., the Pastor of El Señor de la Esperanza Parish and the lead organizer of the gathering.

“The experience has been incredible. It is an experience that I believe I will always remember because it is not every day that one travels to another country and gets to know so many people from different countries,” said Valentina, one of the participants from Chile. “It creates friendships, and God willing these friendships will endure. This was the purpose of the gathering, I believe—to get to know the Congregation from the various countries and thus form a more united family.” 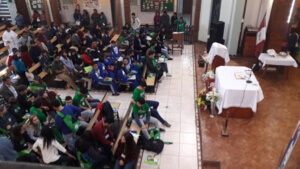 Explore the countries in which Holy Cross serves

The week kicked off with a Mass on Monday morning at the parish’s Matires Latinamericanos Chapel. The gathering was then off to the races, with a series of talks and small group work on the Holy Cross charism, spirituality, and mission.

There were also visits and encounters at the various apostolic works of Holy Cross in Canto Grande, including Yancana Huasy (which attends to the needs of children with physical and mental challenges and their families), Fe y Alegría School, and the Peyton Center (a multipurpose culture center that also has a service-oriented, investigative team that looks critically at family life among the urban poor). 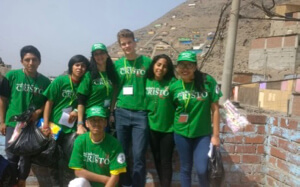 Another part of the gathering was the opportunity to realize a service project in Canto Grande, working in the garden in what will become the Sanctuary of the Sacred Heart in the parish. Also, a small group attended a weekly Television program, sponsored by the parish, to share about the gathering and the spirituality and the work of Holy Cross in Latin America.

The week also included two larger events, a closing Mass and a concert of Catholic music, that drew over 200 youth.

In addition, each night there was a cultural celebration, organized by the youth from each country, to highlight the amazing cultural diversity present at the gathering. This included the celebration on July 28 of Independence Day in Peru.

“During the week, the young men and women got to know what the Church is asking of them. They also learned the characteristics of a Holy Cross youth formed in the light of the vision and spirituality of Blessed Basile Moreau … and how they can continue being a voice in the Church and the Congregation,” said Fr. Tineo.

“We have seen how we as young people have so many ideas to change many things, revolutionize many things,” concurred Christopher, one of the participants from Peru. “United, cross many borders, we can achieve many projects together.”

The youth did not just attend the gathering; they also helped plan it. Ten young people from the Congregation’s apostolates in Peru were part of the organizing team, led by Fr. Tineo.

El Señor de la Esperanza Parish was also heavily involved, with close to 40 families providing lodging in their homes to the youth visiting from other countries. Not only did this involve the parish, but it gave the youth a deeper experience of Peruvian life and culture.

“What impacted me the most was see the reality of the people who live in this sector where we are located because it is very different than the reality that we live day-to-day, and we cannot hide this fact,” said Isabella from Brazil. “This reality is present in our society, and so we need to experience it to realize that it exists.”

"What most impacted me were the people and the families who received us into their homes,” echoed Valentina. “They gave all of themselves to receive me and host me, to the point of lowering the heavens. This relationship and this closeness that we have formed with the people here is something that I did not expect that I’d come to care so much for the people who had received me.”

“This experience really inspired my vocation in Holy Cross,” said Pedro Carreño, C.S.C., one of the novices at the Holy Cross Novitiate in Huaycán. The novices participated in part of the gathering. “Seeing young people who want to serve and work inspires me because I will be able to work with them in the future. Together we are Holy Cross, we are an international community working together.”

“My experience has been very beautiful and gratifying. I feel a part of the country of Peru,” said Laura, a participant from Mexico. “I have made friends from other countries and have gotten to know their cultures, and this is very beautiful. We may live at great distances from one another, but there is something that unites us and that is God.” 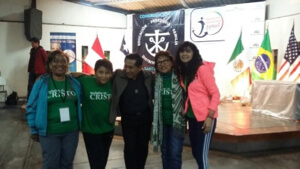 Like the young people who attended the gathering, Holy Cross in Latin America hopes that the fruits from this encounter are long lasting in the Congregation, the Church, and the wider world.

“The spirit with which the young people return from this encounter is one of unity, of integration of each one of them—that there are no barriers or borders. This encounter has helped them to cross borders,” said Fr. Tineo. “They can recognize that there are more things that unite them while they have been able to respect and recognize the uniqueness of each people.”

“This encounter without a doubt will remain very alive in the memory of each one of these young people, and we hope that the Lord helps them to continue growing in their commitment to the Church and with the Congregation in their countries,” said Fr. José Ahumada, C.S.C., Superior of the District of Chile and the District of Peru. 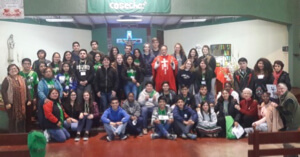 “They have had the opportunity to know the richness of the charism of Holy Cross, and now the challenge is to make it more alive in their own places of ministry,” he continued. “We hope also that some of these young people will feel a call to commit their lives to Christ, as brothers, sisters or priests in Holy Cross.”