On Thursday, June 27, 2019, a new page of history was written for the Congregation of Holy Cross in Haiti as the Province of Our Lady of Perpetual Help held the opening celebration of the 75th Anniversary of the presence of Holy Cross in the island nation. 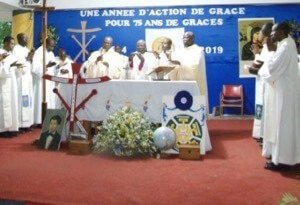 One of the Congregation’s own, the Most Reverend Yves-Marie Péan, C.S.C., Bishop of the Diocese of Gonaives, presided at the Mass, which was held at the College Notre Dame du Perpétuel Secours in Cap-Haïtien. It was to that school that the first Holy Cross missionaries—Victor Lecavalier, C.S.C., Joffre Duchesne, C.S.C., and Émile Beaudouoin, C.S.C.—arrived from the Canadian Province in 1944.

From that school, the mission of Holy Cross has spread across the country with a strong commitment to education and social justice.

Watch a video of the Jubilee Celebration in Haiti 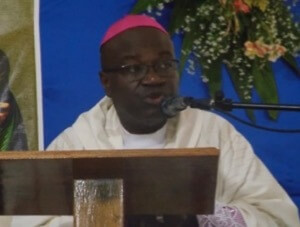 In his homily, Bishop Peán traced the story of the dedication of the country to Our Lady of Perpetual Help, who is also the patron saint of the Congregation’s Province in Haiti. He spoke of the work of Holy Cross in Haitian soil as a work of Divine Providence that continues to shine in this beautiful country.

Keeping with this image, there was a procession of offerings from the different works of the Congregation, each of which brought something that represented its mission: fruits of the earth, seafood, working instruments, and other significant symbols.

At the end of the celebration, Fr. Eric Jasmin, C.S.C., Superior of the Province of Our Lady of Perpetual Help, recounted more of the story of the arrival of Holy Cross to Haiti, situating its mission within the work of the wider Congregation. 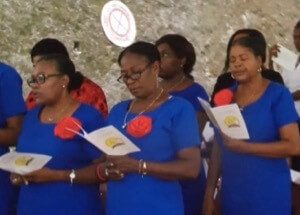 After the beautiful Mass, all the Holy Cross religious present joined with the delegations from the various apostolates of the Congregation in a fraternal celebration to mark the memorable day. Everyone was dressed in the commemorative shirt, which bore the anniversary logo with the theme emblazoned in Creole: "SENTKWA YON GRENN SEL NAN LEGLIZ DAYITI POU YON SOSYETE PIDJANM" (Holy Cross a grain of salt in the Church of Haiti for a firmer society).

All in all, it was a day of great rejoicing, great thanksgiving, as well as great hope. 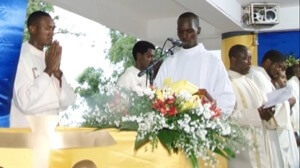 “On June 27, I felt the zeal, the audacity, and the fervor of the first missionaries in the growth of this work which now boasts nearly 90 members in several stages of religious formation and life,” said Fr. Luc-Franck Jean Pierre, C.S.C., Executive Secretary of the Provincial Administration. “For me, the celebration was an experience of the branches that have extended since the first mustard seed was thrown into the ground 75 years ago. Brotherhood, joy and determination for the future were present as fruits of this beautiful foundation, inspired by our blessed founder, Father Basile Moreau.

“This work is called to radiate and to bear fruit in the Congregation,” Fr. Jean Pierre concluded.