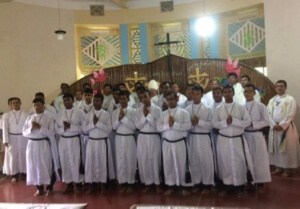 With one of the largest classes of novices in recent years, prayers of joy and thanksgiving permeated the Congregation of Holy Cross’s St. Joseph Province and Sacred Heart of Jesus Province in Bangladesh.

Fifteen novices professed their first vows on Friday, 27 July, at the Holy Cross Pastoral and Retreat Center in Barisol, Bangladesh, after having completed the canonical year with the guidance and accompaniment of their formation staff. Fr. Ashim Gonzalves, C.S.C., was their Novice Master, while Br. Sattya Purification, C.S.C., served as Assistant Novice Master.

The celebration began on Thursday as several friends and relatives of the novices began to arrive at the Novitiate to join other Holy Cross religious and neighboring priests, sisters and brothers for a Mass of Thanksgiving on the eve of the vow ceremony. 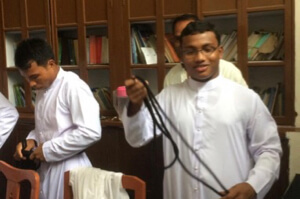 The Mass of First Profession was celebrated by the Most Rev. Lawrence Subrata Howlader, C.S.C., Bishop of the Diocese of Barisol. Bishop Lawrence also served as homilist for the occasion.

Receiving the vows of the novices were the provincials of the respective provinces: Br. Subal Lawrence Rosario, C.S.C., of the St. Joseph Province, and Fr. James Clement Cruze, C.S.C., of the Sacred Heart of Jesus Province. Br. Subal was recently elected as Superior at the brothers’ Provincial Chapter in June.

A short cultural program of music, dance, and presentations followed the Mass. Afterwards, in true Holy Cross fashion, a festive meal was shared by all in attendance to celebrate the newly professed and give thanks for the continue growth of Holy Cross in Bangladesh.

Read news of other First Professions 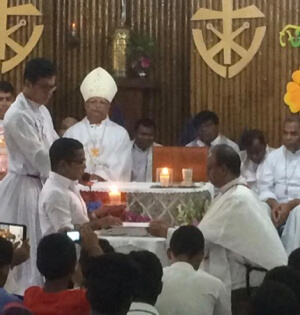