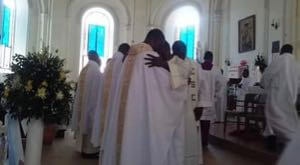 On Saturday, July 30, at the Cathedral of Our Lady of the Assumption in Cap-Haitien, Haiti, Herode Alexandre, C.S.C., Guilney Ismenor, C.S.C., and Jean Benoit Michel, C.S.C., were ordained priests for the Congregation of Holy Cross. They were ordained alongside Lesly Nelson, a member of the local Archdiocese, by the Most Rev. Max Leroy Mesidor, Archbishop of Cap-Haitian.

At their Ordination Mass, these three men were joined by many of their family members, friends, and colleagues, as well as many of their confreres in the Our Lady of Perpetual Help Province (Port-au-Prince, Haiti). It was a moment of great joy both for the Congregation as well as the Church in Haiti.

The celebrations, of course, did not end with the Ordination Mass. Along with festive Masses in the apostolates in which they have served this year, Fr. Isemnor celebrated a Mass of Thanksgiving in his hometown of Bahon in Saint Joseph Parish. On Sunday, August 14, Fr. Michel will celebrate Mass in Port-au-Prince at Riviere Froide, home of The Little Brothers of Saint Therese of the Child Jesus. Fr. Michel studied there for primary school before going to Ensemble Scolaire Pere Basile Moreau, a Holy Cross school founded by Bishop Simon Pierre Saint-Hillien, C.S.C.

During his diaconate, Fr. Alexandre worked at Saint Elisabeth of Portugal Parish in Caracol in the Northeast of Haiti. He will now move to Port-au-Prince where he will be the Assistant at the House of Formation and the Director of the Congregation’s new school at Tabarre.

As a deacon, Fr. Ismenor was working at Ensemble Scolaire Pere Basile Moreau as Director of Campus Ministry and Treasurer of the local community. Now, in his first year of priesthood, he will be Assistant Director at the Novitiate while beginning studies in Administration.