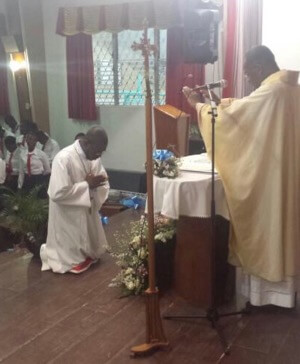 The Congregation of Holy Cross in Haiti had an extra reason to celebrate this past Holy Week as one of its own, Mr. Jean Pierre Sagesse, C.S.C., professed Final Vows on Wednesday, April 12. His vows were received by Fr. Eric Jasmin, C.S.C., Superior of the Province of Our Lady of Perpetual Help (Port-au-Prince, Haiti).

The Mass was held in Cap-Haitien at the chapel of College Regina Assumpta, which is a school sponsored and administered by the Sisters of Holy Cross.

“Holy Cross continues to be alive in Haiti,” said Fr. Jasmin, commenting on the meaning of the Final Profession. “I hope that Jean Pierre will be added to the list of the evangelical people and apostolic workers within the province of Our Lady of Perpetual Help.”

In addition to receiving Jean Pierre’s Vows accordings to the Constitutions of the Congregation of Holy Cross, Fr. Jasmin also presided and preached at the Mass. 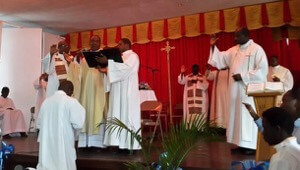 In his homily, the superior picked up on the theme chosen by Jean Pierre for his Final Vows: “Teach me to do your will, O Lord” (Psalm 143:10). He focused his remarks on the vow of obedience in the Congregation’s Constitutions and how the vow would enable Jean Pierre, along with other Holy Cross religious, to follow Jesus and dedicate his life in service of Him.

After the Mass of Final Profession, a dinner was offered for a good number of people, including Holy Cross priests, brothers, sisters, and men and women in formation, as well as members of Jean Pierre’s family and other friends of the Congregation. 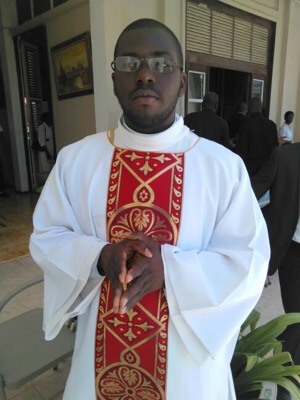 Following his Final Vows and Deaconate Ordination, Jean Pierre will continue serving at the Parish of Mary Magdelene in Duchity, Haiti. Holy Cross founded this parish in Southwest Haiti in 1997.

"For me, to be a deacon gives me the opportunity to walk always with humility of heart toward the goal of doing the will of the Holy Trinity in my manner of serving the Church," said Jean Pierre. "In this, I have the Blessed Virgin Mary as my example, as a model of service and surrender. As a deacon, I hope to conitnue to be a humble servant of the Church of Christ through the Congregation of Holy Cross."