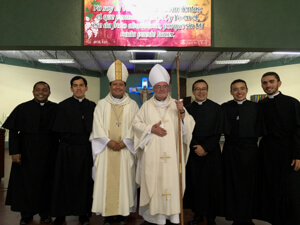 In essence, the young men have been preparing for their First Profession since the moment they were formally received into the Novitiate on January 7, 2016. Throughout the year, they were shepherded in their formation by Fr. John Phalen, C.S.C., Novice Master, and Br. John Tryon, C.S.C., Assistant Novice Master.

Their more immediate preparations for First Vows, however, began on December 13, 2016, with a retreat preached by Fr. Daniel Kayajan, C.S.C., Pastor of St. Rita Parish in Dade City, Florida. The retreat was entitled “The Vows: Poverty, Prophet, and Freedom” and lasted until December 19, 2016.

The Mass of First Profession was held at San Francisco Chapel, which is one of 19 chapels that make up Señor de Esperanza Parish, which is administered by Holy Cross in Canto Grande. Many people from the parish came, as well as from the other Holy Cross apostolates and Church ministries in Peru where the novices had served during their Novitiate year, including Family Rosary, Yancana Huasy, Fe y Alegria 25, Castro Castro prison chaplains, and the Legion of Mary. 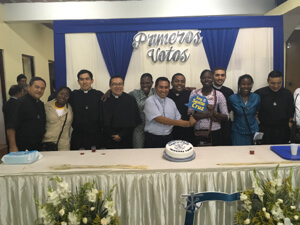 The whole Holy Cross family was also represented with sisters, brothers, and priests in attendance for the professions. Many of the novices’ spiritual directors, counselors, and presenters were also present, as was the staff of St. Martin de Porres Seminary.

The Most Rev. Arthur J. Colgan, C.S.C., Auxiliary Bishop of the Diocese of Chosica, presided at the Mass. Since his episcopal ordination on December 12, 2015, Bishop Colgan has continued to reside at the Holy Cross Novitiate in Huaycán. The Most Rev. Jorge Izaguirre, C.S.C., Bishop Prelate of the Territorial Prelature of Chuquibamba, concelebrated the First Profession Mass.

Following the homily, which was given by Fr. Phalen, the five novices made their professions of poverty, chastity, and obedience according to the Constitutions of the Congregation of Holy Cross. 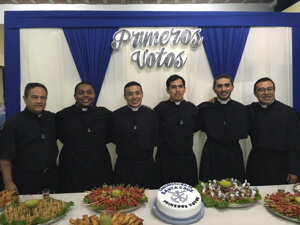 The five now temporarily professed Holy Cross religious then received their Holy Cross habits as well as the Congregational symbol of the cross and anchors to be worn as part of their daily attire. Then Mass continued with the offering of the gifts and the Eucharist.

Following the Mass, there was a reception and celebration for the newly professed men in one of the conference rooms of San Francisco Chapel.

Of the five newly professed, four of them will continue their formation at the Holy Cross House of Formation in Santiago, Chile, joining other men from Brazil, Chile, and Haiti who already reside in the house. The fifth newly professed, Reynaldo, will be returning to Mexico to continue his studies there in philosophy.

"These five young men who have professed their vows in Holy Cross are a sign of hope," said Fr. Ahumada. "Today we see young men who want to give their lives for Christ so that his message arrives with more power to our society so focused in itself. It is also a sign of the internationality of Holy Cross today and tomorrow. The Congregation wants that our future young men are well-prepared and willing to serve in whichever country where the mission of Holy Cross has need of them."

“This group of novices was joyful, creative and united as a community very well,” said Fr. Phalen. “They are talented and generous, and I think they will do well with studies. As a group they were very open to the Novitiate program. They will be missed.” 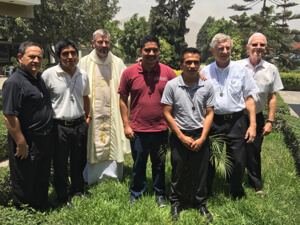 Also present for the First Professions were three Holy Cross postulants, two from Mexico and one from Peru, who were set to enter the Novitiate this year. Being a part of the liturgies and celebrations surrounding the First Professions, as well as spending time with the outgoing novices, was inspiring for the three postulants. They even had the opportunity to serve the Mass of First Profession.

“The joy in the hearts of the five men who made their first profession animated the new guys who are just getting started,” said Fr. Zurcher. “The three of them—Luis, Pedro, and Anthony—entered [the Novitiate] as postulants who were excited and nervous about this next step.

“They're very open to the experience of being novices and want to grow in their spiritual lives as men of Holy Cross,” continued Fr. Zurcher. “They're aware that they need to address formation concerns and are ready to do it. One of them asked, ‘When can I start putting ‘CSC’ after my name.’”

The three young men did not have to wait long, as the following day, January 7, on the Feast of St. André Bessette, the Congregation’s first canonized saint, they were formally received into the Novitiate in a Mass in the Chapel of the Holy Cross Novitiate. Fr. Phalen presided, and Bishop Colgan gave the men a special blessing at the end of Mass. 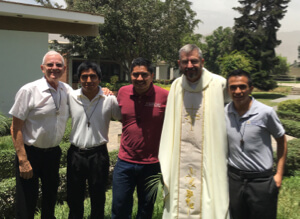 As part of their formal reception into the Novitiate, the three new novices received copies of the Congregation’s Constitutions as well as a special cross to be worn this year as novices.

"We pray for the three young men who just began their Novitiate, that the Lord may accompany them so that they may be good servants and disciples of Christ for the People of God," said Fr. Ahumada.

“My excitement about heading into the new year with the three new novices is in being able to improve the program based on evaluative comments from the last group," added Fr. Phalen. “It's a privilege to accompany young people in serious discernment and present to them the vision of Blessed Basile Moreau for the Congregation of Holy Cross!”