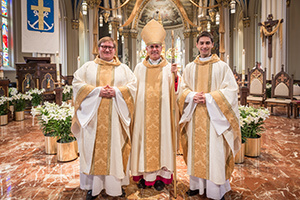 The Congregation of Holy Cross in the United States rejoiced on Saturday, April 2, with the priestly Ordination of two of its members: Fr. Matthew Hovde, C.S.C., and Fr. Dennis Stach II, C.S.C. The two new priests were ordained by the Most Rev. Kevin C. Rhoades, Bishop of the Diocese of Fort Wayne-South Bend, in the Basilica of the Sacred Heart on the campus of the University of Notre Dame in Notre Dame, Indiana.

"It's a great weekend for the two men who were ordained, for the people they serve, for the Church, and for the Congregation of Holy Cross," said Fr. Neil Wack, C.S.C., the Director of the Office of Vocations for the United States Province. "It felt like a 'family reunion,' especially seeing the joy on the faces of the many Holy Cross priests and brothers who were there, but also the tremendous joy in the congregation -- on the faces of family members, friends, and many folks who had no direct connection to the two guys, but wanted to celebrate them and their faith.

"It made me proud to be Catholic, and reminded me of how we are all members of the Body of Christ here on earth, each with his or her own calling from God to embrace our vocations of priesthood, religious brotherhood or sisterhood, marriage, or the single life." 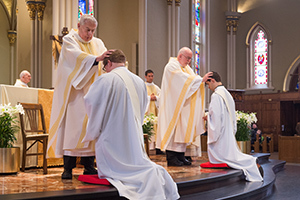 In addition to the presence of their families as well as many of their brothers in Holy Cross, Hovde and Strach were also accompanied in their Ordination Mass by the people with whom and for whom they had served these past six months as deacons. Hovde served as an Assistant Rector at Sorin College at the University of Notre Dame. He also assisted in the University's Campus Ministry. Strach served on the parish staff at St. Ignatius Martyr Parish in Austin, Texas, a parish that is adminstered and staffed by Holy Cross.

The following day, the newly ordained Frs. Hovde and Strach celebrated Masses of Thanksgiving in the same Basilica where they had been ordained the day before. 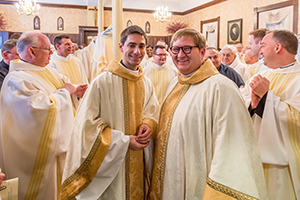 "Fr. Dennis and Fr. Matt showed their humor, joy, and love for the people they serve throughout the weekend, which I think showed who they really are as priests and children of God. Like our founder, Blessed Basil Moreau, they have zeal to make God known, loved, and served, and thus to save souls," said Fr. Wack.

Hovde and Strach, both of whom are members of the United States Province of Priests and Brothers, made their Final Profession in the Congregation on August 29, 2015. The following day they were ordained to the Deaconate.