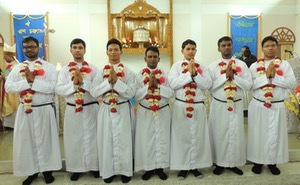 On Friday, January 15, in Koasi Parish, Bhadun, in Bangladesh, seven brothers of the Congregation of Holy Cross made their Profession of Final Vows. All seven are members of the St. Joseph Province, and their vows were received by the Province’s Superior, Br. Harold Bijoy Rodrigues, C.S.C.

They are part of a large wave of brothers' vocations that the Congregation has received in its St. Joseph Province in Bangladesh. Counting them, there have been over 25 Final Professions over the past three years. 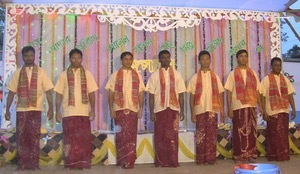 In preparation for their Final Profession, all seven brothers made a 30-day retreat at the Jesuit Novitiate in Bangalore, India. In the days immediately before their Profession, they made another daylong retreat and participated in a purification ceremony (mongol anusthan) and prayer service on Thursday, January 14.

For their Mass of Final Profession, the Most Rev. Patrick D’Rozario, C.S.C., Archbishop of Dhaka, was the main celebrant. The Most Rev. Subrata Lawrence Howlader, C.S.C., Bishop-Elect of the recently created Diocese of Barisal, was also in attendance, along with many other members of the Congregation, as well as many diocesan priests and members of other religious congregations. Prior to being ordained a bishop, Bishop Howlader had served as the Novice Master of some of the brothers who made their Final Vows.

In his homily, aluding to the Year of Mercy, Archbishop D’Rozario told the brothers that their three vows of poverty, chastity, and obedience, are their special means of expressing mercy to others. Both the archbishop and Br. Bijoy thanked the parents of all the newly finally professed brothers for their profound sacrifice in offering their sons to God, supporting their vocational journey in Holy Cross.

Following the Mass, there was a colorful cultural function and a joyful banquet. 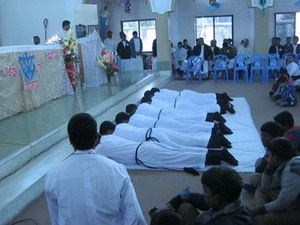 This was the first time that this sub-parish in Bhadun has hosted a Mass of Final Profession. It was chosen because Br. Protim Xavier is from this church.

"We're truly grateful to God for his wonderful blessings on St. Joseph Province, and to the Congregation, for the gift of these seven young men who made the final commitment," said Br. Bijoy. "It shows that vocation to Brotherhood is still very much relevant to the Church and they have a tremendous role to play in bringing the Kingdom of God in this world."

Special thanks to Br. Binoy Gomes, C.S.C., for contributing to this new story, including the pictures.