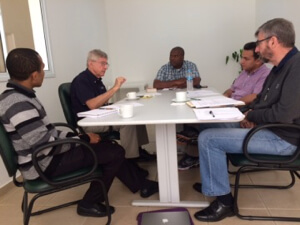 The Novitiate was the main topic for this year’s annual meeting of Holy Cross formation personnel from Latin America and the Caribbean. The gathering took place June 27-29 and was hosted by the District of Brazil in Campinas, Sao Paolo, which is home to the Congregation’s headquarters in the country.

Six formators from Brazil, Chile, Haiti, Mexico, and Peru participated in the meeting, which is a chance for those engaged in formation ministry in the region to gather and learn from each other, as well as deepen the collaboration between the various formation programs.

After discussing the region’s postulant or candidacy programs in Peru in 2016, this year the formators spent a day and a half discussing the critical Novitiate year of formation.

The Congregation currently has two Novitiates in Latin America and the Caribbean: One is located in Huaycán, Peru, and is Spanish-speaking. The other is located near Labadee, Haiti, and is French-speaking. Both Novice Masters, Fr. John Phalen, C.S.C., from Peru, and Fr. Joseph-Keith Louidor, C.S.C. from Haiti, were present for the gathering.

According to the Constitutions of the Congregation of Holy Cross, “The novitiate is the beginning of life in the congregation. Novices are helped to form themselves in meditation and prayer, in the mutual services of a common life, in apostolic service, and in knowledge of the history and spirituality, character and mission of Holy Cross. In short they are challenged and helped to open their hearts to the gospel, to live under the same roof with one another, and to create a brotherhood of disciples. The novitiate is their apprenticeship in celibacy, poverty and obedience” (62). 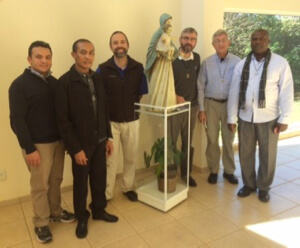 "Novitiate programs have changed over the years,” remarked Fr. Phalen, C.S.C. “At the present time, knowing the founder's story and vision, coming to know one’s self through psychological accompaniment, and experiencing the apostolic mission while living for a month in an active community are added to the time-honored closeness to Jesus Christ in prayer and making a real contribution to the quality of community life.

“The question always in need of frank conversation is what proportion of one's time and energy should be taken up by each element in order to provide a rich introduction to the consecrated life in Holy Cross,” he continued.