After gathering in Chile last year, this year it was Mexico’s turn to host the annual fraternal meeting of Holy Cross formators in Latin America and the Caribbean. The formators gathered from August 19-22 in Guadalupe, Nuevo León, where the Congregation’s mission and community in Mexico is headquartered. 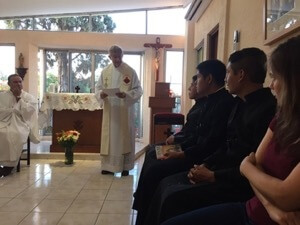 Fr. Thomas Zurcher, C.S.C., Director of Formation and the Holy Cross Community in Mexico, served as the local host for this year’s gathering. There were eight total participants, representing all five of the countries in which the Congregation serves in the region: Brazil, Chile, Haiti, Mexico, and Peru.

The gathering began on Monday night at the Holy Cross community’s house on the street 5 de Febrero. Joining the formators for the opening Mass and then a festive Mexican barbeque with the entire Holy Cross family in Mexico, including the four Sisters of the Holy Cross who live and work in the region.

Fr. Alfredo Olvera Ledezma, C.S.C., Pastor of Nuestra Señora Santísima de la Luz Parish, presided and preached at the Mass, at which the community officially welcomed one new postulant into the Congregation’s formation programs. Two other young men—one an aspirant and one a postulant—also renewed their commitments during the Mass.

The meeting then began in earnest on Tuesday. After a check-in with each other about their vocation journeys and work in formation during the morning, the formators turned to the main topic for this year’s gathering: the spiritual formation of the Congregation’s men in formation. The topic rose out of the discussions of last year’s gathering in Chile. 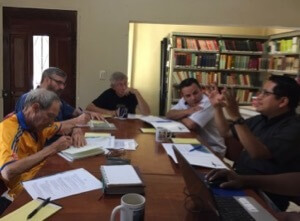 The formators started their analysis by sharing what had been important for them personally in their own prayer and spiritual lives as religious. Their was much honest reflection about what helps brothers and priests remain faithful and keep growing in their vocations. From these conversations, an overall profile was made about what would be the hopes and objectives for the spiritual formation of a religious entering into Final Vows in Holy Cross. The discussion then turned to a SWOT Analysis (Strengths, Weakness, Opportunities, and Threats) of the spiritual formation young men entering the Congregation in Latin America and the Caribbean today.

The meeting then broke for the day for Evening Prayer, Mass, and dinner. The work then continued Wednesday morning, as the formators went stage by stage through the Congregation’s formation process, beginning with vocational discernment through on-going formation, seeking to identify strategies, tools, approaches, experiences, types of accompaniment, and other practices and teachings that would help strengthen the spiritual formation and prayer lives of Holy Cross religious. The afternoon sessions was dedicated to a variety of topics, including the planning of the 2020 gathering. The day again ended with Evening Prayer, Mass, and a delicious Mexican dinner. 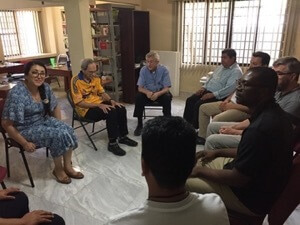 The final day of the gathering, Thursday, was dedicated to the continuing formation of formators themselves. Ms. Rosario Alfaro, Executive Director and one of Founders of ALMAS (Association of Laypeople for Sexual and Affective Maturity), came to lead the day of formation. Holy Cross in Mexico has a long history of collaborating with ALMAS, a lay group that “offers tools, workshops, and courses that allow members of the Catholic Church to achieve an integral human formation that allows them to generate a positive impact in their communities.” The other finally professed members of the Congregation in Mexico came to participate in the session as well.

Ms. Alfaro led the religious in a training entitled “Piedra de Tropiezo, Piedro de Construcción” (“Stumbling Stone, Cornerstone”). The training invited the religious to reflect on their own experience of call and growing through crisis so that could learn how better to discern with, accompany, and form the men in formation.

At the end of the day, the religious thanked Ms. Alfaro for what was a truly engaging and enlightening formation session. They also extended their thanks to Fr. Zurcher and Fr. Jacobo who excelled in organizing the meeting and making everyone feel welcomed during the four days. 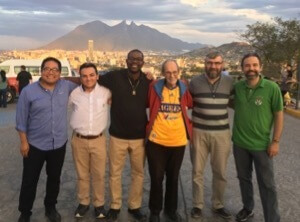 “This meeting or gathering was important, because we were present from all jurisdictions,” said Fr. Daniel Panchot, C.S.C., who works in formation at the House of Formation in Santiago, Chile. “There was a great spirit of much fraternity, with faith in Christ and hope in the mission that he has for Santa Cruz in Latin America and the Caribbean.

“The hosts went above and beyond in their hospitality. The moments we had to share with the men in formation, the laymen and women from the parish, and the Sisters of the Holy Cross reinforced our desire to emphasize the deepening formation of the spirituality of Holy Cross in our programs of formation for religious life,” he added.