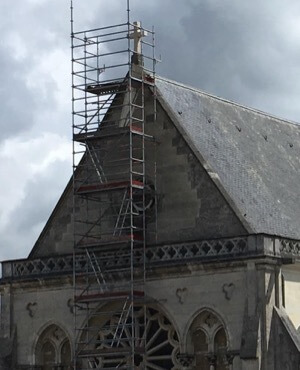 After probably over a century, a cross finally rests once again on the peak of Notre-Dame de Sainte-Croix Church, the Congregation of Holy Cross Conventual Church, in Le Mans, France.

The mounting of the new cross was celebrated on the Solemnity of the Ascension, May 30, 2019. Following the Mass, the parish community gathered in the church courtyard for a blessing led by Fr. John DeRiso, C.S.C., Pastor of the Parish and Director of the International Shrine of Blessed Basile Moreau.

Following the blessing, to the applause and delight of the parishioners gathered below, the Cross was then hoisted to top of the church and installed.

Learn about the Shrine of Blessed Basile Moreau

What happened to the original Cross remains uncertain. Some speculate that it was probably lost during the bombardment of Le Mans during World War II; however, upon further investigation, it is assumed that the more likely scenario is that it was removed when the French government re-appropriated the conventual church in 1911. 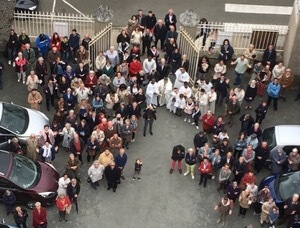 “I am grateful to an anonymous donor who made this happen and to the parishioners who have been so supportive of this project,” De Riso said.

Learn about the Congregation's history 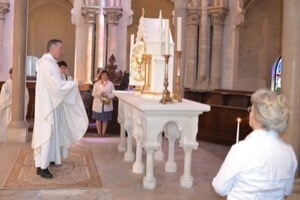 The installation of the cross was not the major blessing to take place at Notre-Dame de Sainte-Croix within the past month. On the Feast of Corpus Christi, in addition to administering First Communion to 22 children, Fr. DeRiso blessed the church’s new tabernacle. Like the church itself, the tabernacle is neo-gothic in style. It also echoes the architecture of the ciborium (baldacchino) above it. The new tabernacle, as well as the beautifully carved stone table on which it rests, was made possible thanks to the generosity of parishioners of Sainte-Croix and of friends of the Shrine.

As Fr. John said at the moment of blessing, may the faithful who visit the Blessed Sacrament know the joy of Moses, with whom, in the tent of meeting, the Lord spoke face to face, as a person speaks to a friend. (Exodus 33)