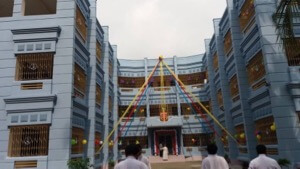 The new Holy Cross Novitiate in Sagardi, Barisal, Bangladesh was inaugurated on May 19, 2017, with a Mass celebrated by the Most Rev. Theotonius M. Gomes, C.S.C., Archbishop Emeritus of Dhaka.

The Novitiate in Sagardi is a joint Novitiate, serving the Congregation’s two provinces in Bangladesh: the Sacred Heart Province (of priests) and the St. Joseph Province (of brothers).

Both provincial superiors, Fr. James C. Cruze, C.S.C., of the Sacred Heart of Jesus Province, and Br. Bijoy Harold Rodrigues, C.S.C., of the St. Joseph Province, attended the ceremony and festivities. Many other Holy Cross priests, brothers, and sisters were present, as well as other priests and members of other religious communities. 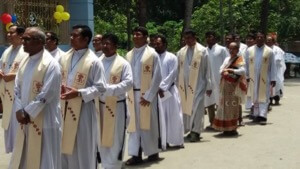 The inaugural ceremony began with a speech delivered by the convener of the inaugural ceremony committee, followed by words from the provincial superiors, contractor, and engineer. After some light food, the Eucharist was celebrated in the new Novitiate chapel. Following the Mass, there was a delicious, festive lunch for all guests.

The Holy Cross Novitiate in Bangladesh has been located in Barisal since 1958. The previous building was initially constructed for a small local community of religious sisters, before it came into the possession of Holy Cross.

While having served the Congregation for many decades, the old Novitiate had become inadequate, particularly for the growing formation programs in the country. It had only one dormitory for all the novices, a small storage room, a combined small office and library, one classroom with benches, a very small chapel, and two small bedrooms for the director and his assistant. The kitchen was primitive and the dining room was small. There was no common recreation room. 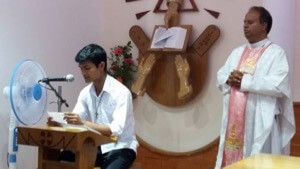 Construction on the new Novitiate, which is located on the site of the previous Novitiate in Barisal, began October 12, 2015. Several different priests of the Sacred Heart of Jesus Province have overseen the construction, beginning with Fr. Hamlet F. Botlero, C.S.C., then Fr. Proshanta N. Cruze, C.S.C., and finally Fr. Ujjal L. Rozario, C.S.C.

The new Novitiate is a three-story building that can comfortably accommodate up to 30 novices, staff, and guests. There are two dormitories for novices as well as two rooms for the novice master and his assistant, as well as five gusts rooms. There are also two offices, a lecture and study hall, library, dining room, parlor, recreation room, kitchen, store room, staff room, and a beautiful chapel. 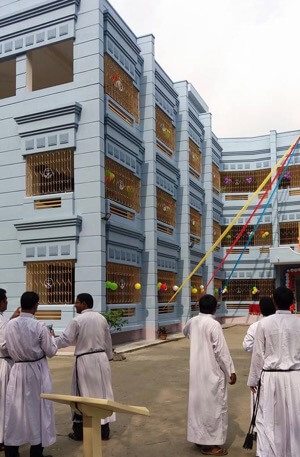 The building has a “light and airy” feel to it, according to Fr. Ashim Gonsalves, C.S.C., the Novice Master, and while “beautiful,” it is “not fancy.”

At present there are eight novices in the Novitiate: three from priests’ society and five from brothers’ society. They are under the care of Fr. Gonsalves and the Assistant Novice Master, Br. Sattya Purification, C.S.C. At the end of July, they expect the arrival of 19 new novices, with 11 for the priests’ province and eight for the brothers’ province.

“This new novitiate sinks our roots deeper in Bangladesh and holds the promise of the next generations of Holy Cross religious here,” said Fr. Gonsalves. “This is a building built by and for us where many young men will embrace religious life in Holy Cross.”