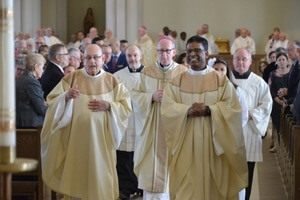 On January, 20, 2017, the feast of the Congregation of Holy Cross’s Founder, Blessed Basile Moreau, the dream of the St. John Evangelist Roman Catholic Community, Viera, Florida, was finally fulfilled as it dedicated its new church.

In the presence of several Holy Cross religious and over 1,500 parishioners and well-wishers, the Most Rev. John Noonan, Bishop of the Diocese of Orlando, dedicated the parish church. It was a moving and fitting celebration for the community and its new worship space.

The new, basilica-style structure is 19,000 square feet and seats more than 1,000 people. The parish consists of 2,300 active families and is the largest parish community in the Diocese of Orlando. 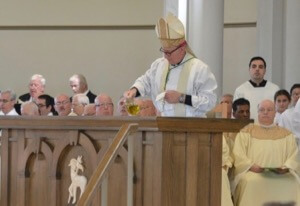 “It could not be more fulfilling,” said Pastor Fr. Bradley Beaupré, C.S.C., who has waited to complete the church before his retirement. “I’m in my fiftieth year of priesthood and it’s a great way to end my active ministry. It’s so exciting for the people.”

Holy Cross has been at St. John Evangelist since its founding in 2001. The Diocese of Orlando approached the Congregation to found the parish in large part because Holy Cross already had a religious house a short 30-minute drive away in Cocoa Beach. Holy Cross brothers and priests from that house, known as Christopher Lodge, were already serving in a variety of ways within the Orlando Diocese. 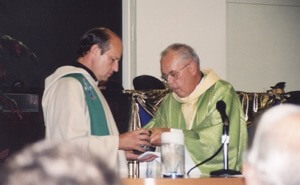 St. John Evangelist Parish was formed both to meet the needs of Catholics from two overflowing nearby parishes and to provide a Catholic Church in the new town of Viera. Fr. Laurence Olszewski, C.S.C., served as the founding pastor.

Initially, parishioners gathered on weekends in the Brevard County commissioners’ chambers and at Faith Viera Lutheran Church for daily Mass. A parish center was planned, and the groundbreaking took place in December 2005.

The Center was completed on March 7, 2007, and the parish community began worshipping there, yet the dreaming and planning was already underway for a permanent church.

The newly dedicated the church proudly declares its Holy Cross heritage. Relics of St. Andre Bessette, the Congregation’s first canonized saint, and Blessed Moreau were placed within the altar. There are also statues of both St. Andre and Blessed Moreau.

There is a beautiful stained glass window depicting Blessed Moreau, Saint Andre, Fr. Jacques Dujarie (who founded the Brothers of St. Joseph who later became the Brothers of Holy Cross), and Fr. Edward Sorin, C.S.C. (who led the first Holy Cross missionaries to the United States and went on to become the Congregation’s third Superior General).

In additional, in the narthex of the church are statues of the Sacred Heart of Jesus and Our Lady of Sorrows while St. Joseph adorns the sanctuary. In the near future, an outdoor plaza will be dedicated to St. Andre Bessette.

To thunderous applause of the parishioners, Bishop Noonan also announced at the dedication the appointment of Fr. John Anthony Britto, C.S.C., as the church’s new pastor. Fr. Britto has served for the last five years as the parish’s Parochial Vicar.

In reflecting on the dedication, Fr. Britto said, “To be able to enter into the sanctuary is like the Psalms saying, ‘Let us go rejoicing to the house of the Lord.’ There is a feeling of rejoicing, contentment, and gratitude to God for what he has done."