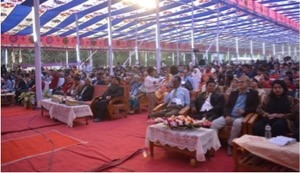 With singing, dancing, and reminiscing, over 7,000 students, alumni, distinguished guests, and well-wishers from Bangladesh and abroad gathered on January 11, 2019, at Notre Dame College in Dhaka to celebrate the school’s 70th anniversary.

Notre Dame College was founded in Lakshmibazar, Dhaka, in November 1949, by Holy Cross priests at the invitation of Archbishop Lawrence Leo Graner, C.S.C., who at the time was Bishop of what was then the Diocese of Dhaka.

Originally called St. Gregory College as an extension of St. Gregory School, it was re-located to its current location in Motijheel in 1954 and renamed Notre Dame College. Since then, Notre Dame College has gone on to become the premier college and institution of higher secondary education in the country. Annually it receives over 15,000 applications for only 2,500 slots. Eighty five percent of the student body is Muslim, yet the College as part of its mission has always made special provisions for the education of Christians and other minorities.

The excellence of Notre Dame College moved the government and Church in Bangladesh to petition Holy Cross to found a university in the country, and Notre Dame University held its first classes on December 7, 2014.

In his message to Notre Dame College for its anniversary, Mohammad Abdul Hamid, the President of the People’s Republic of Bangladesh, wrote: “In order to make good citizens from its inception, Notre Dame College has been educating the young people with morals and value education. … I pay my due respect to the dedicated persons who are illuminating their light of wisdom to create a better society and a digital Bangladesh.” 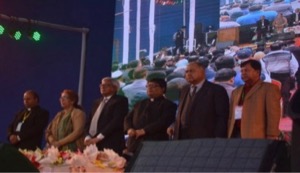 In his comments at the celebration, Cardinal Patrick D’Rozario, C.S.C., Archbishop of the Archdiocese of Dhaka and Chairman of Notre Dame College Governing Body, encouraged those gathered not to live simply with nostalgic memories, but to use the values of mutual respect, peace, and harmony that they received from the College in order to be “ambassadors of peace and harmony for the people of Bangladesh and the rest of the world.”

Reflecting on the joyful occasion of 70 years, Fr. James Cruze, C.S.C., Provincial of the Sacred Heart Province, which oversees Notre Dame College, said, “The mission to bring to the nation the light of knowledge and wisdom with its success has become a matter of pride and glory.”