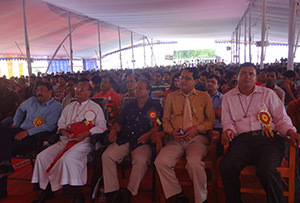 Last month, on July 1, Notre Dame College Mymensingh held its first-ever orientation for the students and their parents as part of what it is its inaugural year of classes. The Most Rev. Paul Ponen Kubi, C.S.C., the Bishop of Mymensingh, Fr. James Cruze, C.S.C., the Superior of the Sacred Heart Province (Dhaka, Bangladesh), and Fr. Bakul S. Rozario, C.S.C., the college’s Principal, were all present for the presentation and program, which also drew a number of local dignitaries in addition to parents, guardians, students, and teachers. All told, over 1,800 were in attendance.

The four-hour long program began with a flag hosting. The national flag was hosted by Mustakin Billa Faruki, the District Commissioner of Mymensingh. The college flag was hosted by Fr. Rozario. After the flags were hosted and the guests took their places on stage, there were a series of speeches, beginning with a welcome address by Fr. Rozario. Many of the speakers spoke of how the college’s opening fulfills a long-held dream to have a Catholic college in the Diocese of Mymensingh.

Following the speeches, there was a cultural program with performances by students, parents, and teachers. It ended with an attractive magic show. Once the program concluded, the students were sent to their classrooms to continue their orientation. 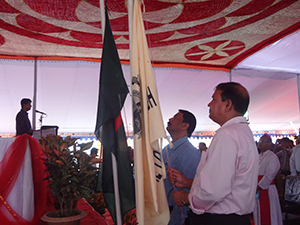 The Diocese of Mymensingh was only founded in 1987, yet the presence of the Catholic Church among the tribal peoples of the region, who are known as both “Garo” and “Mandi,” dates back over 100 years. In 1910, Holy Cross religious, who have been working in East Bengal since 1853, established the first Catholic mission among the Garo people. The subsequent evangelization of Garos ranks as one of the great fruits of the Congregation’s missionary work in East Bengal, which included parts of present-day India and Bangladesh. Today, the Diocese of Mymensingh has over 80,000 Garo Catholics, making it the largest Catholic diocese in Bangladesh.

According to Fr. Rozario, Notre Dame College Mymensingh, heralds “a new type of Catholic presence in the Diocese. This college will also serve the entire community in witness to Christian values and will provide an opportunity for Mandi youth to have a close-by college to be the cap on all the previous educational efforts. The college will provide a stable sense, at the beginning of the next 100 years, of the Church's presence and commitment.”

Learn more about Holy Cross' work as educators in the faith

The cornerstone for new college was laid back on March 1, 2013. The plans eventually call for a five-story building, but the first phase of construction includes only the first two floors as well as the resident building.

As classes begin in this inaugural year, the College awaits the arrival of Fr. Richard V. Warner, C.S.C., Superior General of the Congregation, for the formal inauguration of the newest college in the Congregation’s mission.