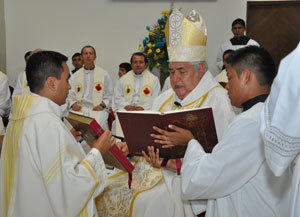 On Friday, October 11, Mr. Jorge Armando Morales Trejo, C.S.C., was ordained a deacon by the Archbishop of Monterrey, the Most Rev. Archbishop Rogelio Cabreras, in Guadalupe, Nuevo León, Mexico. The Ordination Mass took place at Nuestra Madre Santísima de La Luz Parish, one of two parishes staffed by the Congregation of Holy Cross in Mexico.

About 600 parishioners and friends of the Congregation, as well as over 40 members of Armando’s family, joined the Holy Cross community in Mexico to fill the church and the parish hall for the Mass and the celebratory dinner that followed.

Joining in the festive celebration were many Holy Cross priests, brothers, and sisters from both North America and South America. Among them was Rev. Thomas J. O’Hara, C.S.C., Superior of the United States Province of Priests and Brothers, which oversees the Congregation’s work in Mexico. 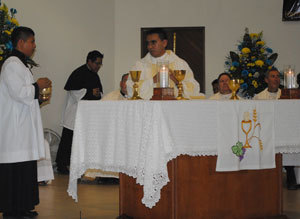 “Archbishop Rogelio Cabreras celebrated the sacrament with an eloquent homily, emphasizing several times that the service of the deacon at the table of the Lord is tied to the deacon’s service at the table of the poor,” said Fr. O’Hara. “One without the other is incomplete. He spoke of the transitional diaconate not as a step in an ‘ascent’ to the priesthood or to the episcopacy but as a cumulative process of grace that, hopefully, would endure throughout all of the orders one might receive.

“As he preached, I think all of us realized it was a moment of grace in an area of Mexico that not long ago was known for its violence and bloodshed.” 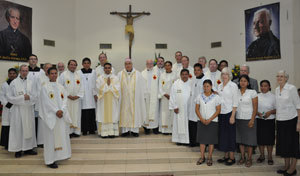 Following his ordination to the deaconate, Armando is continuing his fourth year of theology at the Franciscan Institute of Theology in San Pedro, Nuevo León, Mexico. He is scheduled to graduate in May.

At the same time, he will be doing weekend ministry at La Luz Parish. His principle ministry for the year will be the pre-baptismal preparation program for parents and sponsors presenting their children for that sacrament.

Armando was received into the Congregation on January 6, 2008, and professed First Vows on January 6, 2009. He made his Final Profession of Vows on March 19, 2012. His Ordination to the priesthood is expected in 2014.