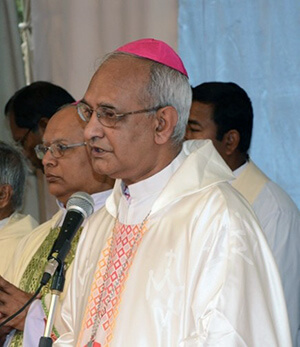 Responding to the request of the Bishops Conference of Bangladesh, Pope Francis erected the country’s second Ecclesiastical Province in Chittagong on February 2, 2017. As a result, the Holy Father raised Chittagong to the rank of Metropolitan Archdiocese and made Khulna and Braisol as its suffragan dioceses.

Pope Francis also appointed the Most Rev. Moses Costa, C.S.C., who was serving as Bishop of the Diocese, as the first Metropolitan Archbishop of Chittagong.

“Chittagong is one of the oldest dioceses in the country, and its being raised to an archdiocese is a great honor for the People of God there,” said Fr. Robert L. Epping, C.S.C., Superior General. “Archbishop Costa being named the first archbishop is also an honor for the Congregation of Holy Cross which has served in that region for well over a century. We pray for him and the People of the Archdiocese upon receiving this great news.”

In response to his appointment, Archbishop Costa said: "I thank God for this blessing. His grace gladdens me. I will continue to preach the Gospel with enthusiasm and help our people to be witnesses of God among the people."

Archbishop Costa is one of six priests of the Sacred Heart of Jesus Province (Dhaka, Bangladesh) who are members of the hierarchy in Bangladesh. One of those is his Eminence, Patrick D’Rosario, C.S.C., Archbishop of Dhaka, who was elevated to the College of Cardinals by Pope Francis in St. Peter’s Basilica, on November 21, 2017. Cardinal D’Rosario is the first cardinal from Bangladesh and the second cardinal from the Congregation of Holy Cross.

From the beginning, the work of Holy Cross in East Bengal was marked by crosses, yet this perseverance bore fruit in the establishment of the local Church, the evangelization of the tribal peoples, and construction of many educational and social service ministries and institutions that serve not only Catholics and other Christians, but also many non-Christians in the predominantly Muslim country.