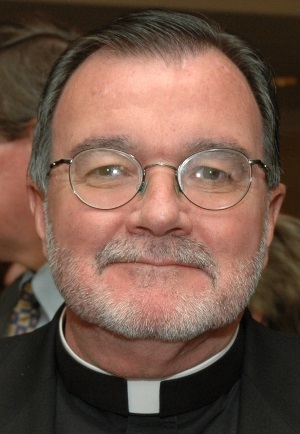 Chosica is the diocese in which the mission of the Congregation of Holy Cross in Peru is currently centered. Among other apostolates, Holy Cross administers the sprawling Lord of Hope Parish in Canto Grande, which is divided into 19 churches and chapels, serves more than 200,000 people.

"Bishop-Elect Colgan has served the Church and the Congregation well," said Fr. Richard V. Warner, C.S.C., Superior General of the Congregation of Holy Cross. "He has been an inspiration for the people to whom and with whom he has served for many years. We are honored that our Holy Father has called him to this new ministry."

Since his Final Profession on August 11, 1971, and his Ordination to the Presbyterate on October 27, 1973, Bishop-Elect Colgan has spent most of his religious life in Holy Cross serving in Peru. In addition to working as pastor at both Holy Cross Parish in Chimbote and Lord of Hope Parish in Canto Grande, he has served in various leadership and administrative capacities in the Church in Peru, including Vicar General of the Diocese of Chimbote, Episcopal Vicar of the Archdiocese of Lima, Theological Advisor to the Bishop's Commission on Social Action, and two stints as Vicar General in Chosica.

"As I pray about my appointment, I know that my experience in the past is that the Lord provides the grace and the wisdom we need to respond to his calls in the course of our life, so I trust that that will be the case this time too," said Bishop-Elect Colgan.

Bishop-Elect Colgan is the second Holy Cross priest appointed bishop by Pope Francis. The other appointment came earlier this same year and was also in Peru. On May 11, 2015, Bishop Jorge Izaguirre, C.S.C., was appointed Bishop Prelate of the Chuquibamba, Peru. He was ordained on July 10, 2015, outside San Miguel Cathedral in Camaná, Peru.

Bishop-Elect Colgan's Episcopal Ordination will take place on December 12, 2015. It will be held at San Andrés de Huaycán Cathedral in Chosica.