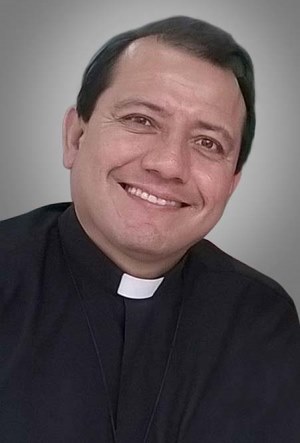 Yesterday, May 11, 2015, Pope Francis appointed Fr. Jorge Izaguirre, C.S.C., the Bishop Prelate of the Territorial Prelature of Chuquibamba, Peru. At the time of the appointment, Fr. Izaguirre was serving as the Fourth General Assistant on the Congregation’s General Council as well as the Superior and Director of Formation of the Congregation’s International House of Formation in Santiago, Chile.

Fr. Izaguirre replaces the Most Rev. Mario Busquets Jorda, who turned 80 and recently completed 14 years as Prelate of Chuquibamba. Plans are still in process for his ordination and installation.

In relaying the news of Fr. Izaguirre’s appointment to the Congregation of Holy Cross, Fr. Richard V. Warner, C.S.C., Superior General, wrote: “It is with great joy that we received the good news that our brother and friend Fr. Jorge Izaguirre, C.S.C., has been appointed by Pope Francis as Bishop-Prelate of the Territorial Prelature of Chuquibamba, Peru. … Let us join together in prayer for our brother and friend, and may the Spirit guide and direct him in his new ministry so that he might be a bishop after the mind and heart of Pope Francis.”

A native son of Peru, Fr. Izaguirre was born on January 14, 1968, in Casma, Ancash. After studying theology in Chile, he professed Final Vows in the Congregation on January 14, 1996, and was ordained on February 15, 1997. After Ordination, Fr. Izaguirre served as Assistant Pastor at Santa Cruz Parish in Chimbote, Peru. In 1999, he was transferred to Lima to take charge of the house of formation where he served for 6 years. In 2004, Fr. Izaguirre went to the United States to do advanced studies at Weston Jesuit School of Theology and Boston College, where he earned his Master in Theology.

After his return to Peru in 2006, he became pastor at El Señor de la Esperanza Parish in Canto Grande. There, with nine other Holy Cross priests, he served over 250,000 people, mostly Catholics, who live in the parish boundaries. Fr. Izaguirre was appointed to the General Council in 2010. While continuing to serve as the Fourth Assistant, he was appointed in 2013 as the new Director of Formation and Superior of the International House of Formation in Santiago.

The Congregation has served in Peru since September 1963 when the first missionaries from the United States arrived in Cartavio to assume pastoral care of the field hands and factory works in the sugar hacienda there. While Holy Cross turned over the pastoral work in Cartavio to the diocese in 1974, its present and ministry in Peru, now focused around El Señor de la Esperanza Parish in Canto Grande, continues to focus on bringing hope to those bearing crosses in their lives.