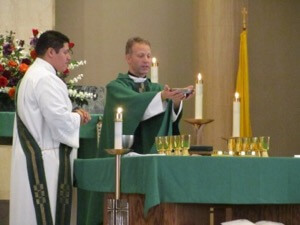 On Monday, May 29, 2017, the Holy See announced that Pope Francis has named Fr. William A. Wack, C.S.C., as the new Bishop of the Diocese of Pensacola-Tallahassee in Florida in the United States. His Episcopal Ordination has been set for August 22, 2017.

“I join with all of his Holy Cross brothers and his wonderful family in congratulating Fr. Bill (Bishop-designate Wack) on this important pastoral responsibility as Shepherd of the People of God in northwest Florida,” said Fr. Robert L. Epping, C.S.C., Superior General of the Congregation. “We are proud that the Holy Father has chosen one of our finest pastors to be a new bishop in the Church.

“We offer our prayers and fraternal support as Fr. Bill begins to grasp the reality of all the Church asks of him as an ‘educator in the faith’ and a pastor of souls,” he continued. “May God grant him a super-abundance of grace, wisdom and courage to discharge the responsibilities of his new assignment.”

Bishop-elect Wack was born in South Bend, Indiana, to Dr. James and Alice Wack. He is the ninth of ten children. He entered the Old College Undergraduate Seminary at the University of Notre Dame in August 1985. He professed Final Vows on August 28, 1993 and was ordained a priest at Sacred Heart Basilica at the University of Notre Dame on April 9, 1994.

Bishop-elect Wack’s first assignment as a priest was as the Parochial Vicar at Sacred Heart Parish in Colorado Springs, Colorado. Afterwards, he served as the Associate Director of the Office of Vocations for the United States Province and then as the Director of André House of Hospitality in Phoenix, Arizona, before coming Pastor at St. Ignatius Martyr Parish in Austin, Texas, in 2009.

“In a prayer that the Diocese [of Pensacola-Tallahassee] has been praying these past five months while awaiting a new bishop, they have asked God to send them a shepherd who will lead them to be ‘Christ’s heart of mercy, voice of hope and hands of justice,’” said Fr. Thomas J. O’Hara, Superior of the United States Province of Priests and Brothers. “I believe their prayers have been answered in Fr. Bill’s appointment as their new Bishop. 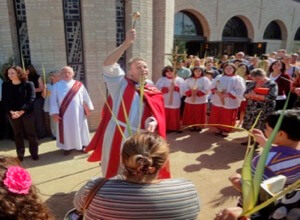 “We pray for our brother Bill, that God may fill him with His peace and light in these days of transition. He has been a blessing to the people of St. Ignatius Martyr Parish in Austin, Texas for the past eight years, and will no doubt be a blessing to all in the Diocese of Pensacola-Tallahassee. As his brothers in Holy Cross, we are proud of him and are united with him in prayer as he assumes this important responsibility in our Church”, said Fr. O’Hara.

At his introductory press conference, Bishop-elect Wack spoke of his love for the Congregation of Holy Cross and for his vocation, as he looks forward to shepherding the People of God in his new diocese.