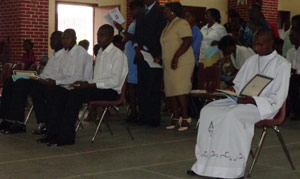 On Sunday, September 8, the Congregation of Holy Cross in Haiti gathered in the auditorium of the Collège Notre-Dame du Perpétuel Secours in Cap-Haïtien to celebrate the Profession of Religious Vows of several of its members. Presiding at the Mass and receiving the vows of the men was Rev. Michel Martin Eugène, C.S.C., Superior of the Our Lady of Perpetual Help Province, which serves Haiti.

In the Mass, Mr. Kesnel Ciceron, C.S.C., made his Final Profession of Vows according to the Constitutions of the Congregation of Holy Cross. This Saturday, September 14, Ciceron will be ordained a deacon by Most Rev. Simon Pierre Saint-Hillien, Bishop of Hinche, at Sacred Heart Parish in Cap-Haïtien.

Three novices, having completed their Novitiate year, made their First Profession of Vows at the same Mass on September 8. They are Mr. Garry Almonor, C.S.C., Mr. Ugues Jadel Joseph, C.S.C., and Mr. Dieusel Regulus, C.S.C.

One week prior, on August 30, another novice, Mr. Polux Jean-Baptiste, C.S.C., had made his First Profession of Vows at the Congregation's parish in Magagnosse, thus bringing the total number of first professions for Holy Cross in Haiti this year to four.

Read the Constitutions of the Congregation of Holy Cross

Rev. Éric Jasmin, C.S.C., the Director of the Seminary, and Rev. Paul Elie Cadet, C.S.C., the Novice Master, were among the over 30 Holy Cross religious in attendance for this celebration.

With these professions, the Congregation in Haiti now has over 20 men in temporary vows and 55 religious in Final Vows.

"These professions are a great grace for the Congregation in Haiti," said Rev. Michelet Labbé, C.S.C., the Director of the Technical Section at the Collège Notre-Dame. "We thank God for sending so many laborers for His harvest."