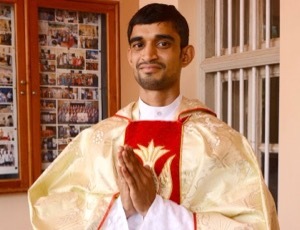 On April 24 and 25, 2019, the Province of South India continued its 2019 Ordinations to the priesthood. The province previously kicked off its Ordinations for the year on February 20, with the Ordination of Fr. Rajashekhar Gundiga, C.S.C.

The second to be ordained for the province was Fr. Joyson Barboza, C.S.C., on April 24. The Ordination Mass took place at his home parish of St. John the Evangelist Church in Pangella. The Most Rev. Gerald Isaac Lobo, Bishop of the Diocese of Udupi, presided and preached. There were about 25 priests who celebrated the Mass and joined Bishop Lobo in the Laying on of Hands during the Rite of Ordination.

About 500 people participated in the Ordination, including a number of Holy Cross brothers and religious sisters. Seminarians from the Province assisted at the solemn ceremony. All of them joined in the celebratory meal following the Mass. 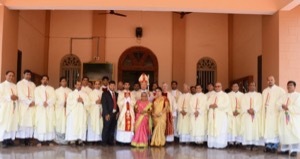 The next to be ordained for the Province of South India was Fr. Wilfred Dias, C.S.C. The Most Rev. Derek Fernandes, Bishop of the Diocese of Karwar, presided and preached at the Mass on April 25. The ceremony took place on the DSFS school grounds in Kodani. 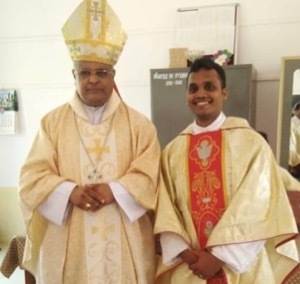 Once again, around 25 concelebrants joined in the celebration. Overall, there were approximately 700 people in attendance, including over 50 people who traveled by bus from the parish where Fr. Dias served as a deacon.

They were ordained deacons the following morning, October 16, by the Most Rev. Peter Machado, Archbishop of the Archdiocese of Bangalore.

See a worldwide gallery of Ordinations 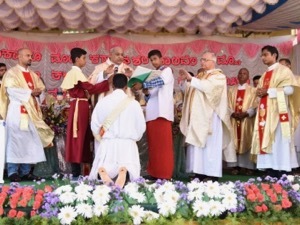