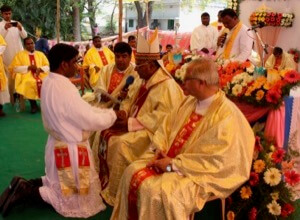 The month of February saw two more priests ordained for the Congregation of Holy Cross in Asia: Fr. Rajashekhar Gundiga, C.S.C., in India, and Fr. Bikash Kujur, C.S.C., in Bangladesh.

The first of the two ordinations was that of Fr. Gundiga, who was ordained by the Most Rev. Govindu Joji, Bishop of the Diocese of Nalgonda, on February 20. It was a historic ordination for the Congregation in India because it was the first Ordination held in the Telegu Region.

Fr. Guindiga’s four Deaconate classmates in the Province of South India were present for the Ordiantion. The five men had professed Final Vows together on October 15, at the newly inaugurated St. Andre Home in Sakalavara, Bangalore. They were ordained deacons the following day by the Most Rev. Peter Machado, Archbishop of the Archdiocese of Bangalore.

Just two days later, on February 22, across the border in Bangladesh, Fr. Kujur was ordained to the priesthood by the Most Rev. Sebastian Tudu, D.D., Bishop of the Diocese of Dinajpur. The Rite of Ordination took place at Our Lady of the Assumption Church in the village of Khalisha. After the Mass, there was a cultural program, which was followed by a celebratory meal. 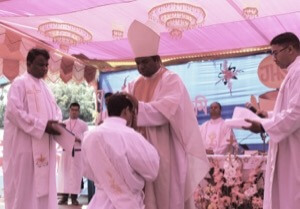 Fr. Kujur’s ordination to the priesthood comes after his Final Profession on April 13, 2018. It comes a month and a half after the Ordination to the Priesthood of Fr. Khokon Gabriel Nokrek, C.S.C., on January 4, 2019. Both are members of the Sacred Heart of Jesus Province.