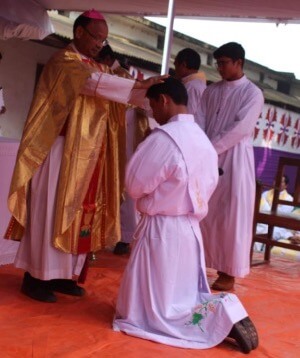 On January 4, 2019, the Congregation of Holy Cross in Bangladesh celebrated with great joy the Priestly Ordination of Fr. Khokon Gabriel Nokrek, C.S.C. Presiding at the Mass of Ordination at the Holy Cross Parish of St. Paul’s in Pirgacha was the Most Rev. Paul Ponen Kubi, C.S.C., Bishop of the Diocese of Mymanshing. After the Mass, there was a great celebration, including a cultural program and a meal for all of those in attendance.

On the eve of the Ordination, Fr. Khokon participated in a traditional Garo blessing ceremony called Thokka Onsthan in the presence of his family, community members, and friends.

Fr. Khokon had previously professed Final Vows in the Congregation on April 13, 2018, along with Mr. Bikash Kujur, C.S.C. Both men were ordained to the Deaconate the following day by the Most Rev. Sebastian Tudu, Bishop of Diocese of Dinajpur. 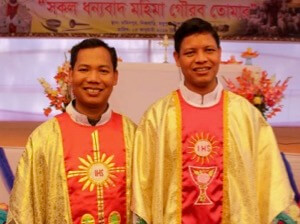 Fr. Khokon's brother, Fr. Robert Nokrek, C.S.C., was one of five Holy Cross priests (out of a larger group of 16) ordained by Pope Francis on December 1, 2017, during the Holy Father’s apostolic visit to Bangladesh. Both are members are of the Sacred Heart of Jesus Province.

Following his Ordination to the Priesthood, Fr. Khokon has been appointed as the Assistant Pastor of the Khalippur Parish.

January was a joyous month for Holy Cross in Bangladesh, as in addition to Fr. Nokrek’s Ordination, nine Holy Cross brothers of the St. Joseph Province made their Final Profession of Religious Vows.