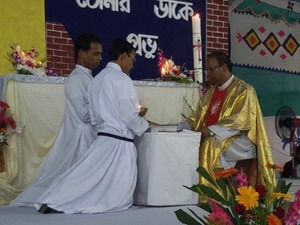 On April 13, 2018, the Sacred Heart of Jesus Province in Bangladesh celebrated both new commitments made and gave thanks for commitments faithfully lived.

In a celebration at which the Most Rev. Theotonius Gomes, C.S.C., Auxiliary Bishop Emeritus of Dhaka presided and preached, two members of the Province preparing for priesthood made their Final Professions: Mr. Khokon Gabriel Nokrek, C.S.C., and Mr. Bikash Kujur, C.S.C. Their vows were received by Fr. James Cruze, C.S.C., Superior of the Province. 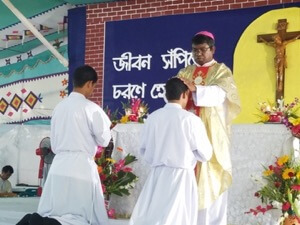 The following day the Province celebrate once again, this time with the Deaconate Ordinations of the two men who made their Final Professions on April 13. The Most Rev. Sebastian Tudu, Bishop of Diocese of Dinajpur, served as the ordaining bishop.

These celebrations came as the culmination of the Province’s Annual Assembly from April 10-14. Both of these liturgies were followed by cultural programs and a meal for the many priests, brothers, sisters, families, and friends present.

Deacon Khokun is 33 years old and comes from Mominpur in the Diocese of Mymensingh. He is one of five children. Deacon Khokun made his First Profession of vows on July 22, 2011. His brother, Fr. Robert Robi Nokrek, C.S.C., was ordained by Pope Francis during his apostolic visit to Bangladesh on December 1, 2017.

Deacon Bikash was born in 1985 in Khalisha in the Diocese of Dinjapur. He is the youngest of six brothers. Deacon Bikash also professed his First Vows in the Congregation of Holy Cross on July 22, 2011.

See a gallery of photos from Final Professions 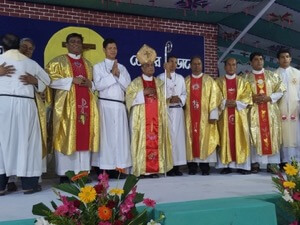 "Holy Cross has a long, proud history in building the Church of Bangladesh,” said Br. Paul Bednarczyk, C.S.C., Vicar General and First Assistant of the Congregation, who as present for the Province’s Assembly and celebrations. “Without a doubt, Deacons Bikash and Khokun have the same zeal and passion for mission as our early missionaries, and I am confident they will continue our proud Holy Cross legacy well into the future."