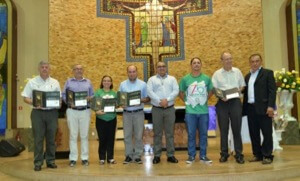 On Wednesday, March 14, the Congregation of Holy Cross in Brazil celebrated the 75th Anniversary of the founding of Colegio Dom Amando in Santarém in a beautiful Mass presided by the local bishop, the Most Rev. Flavio Giovenale, SDB. Following the Mass, the Alumni Association continued the celebration by sponsoring a festive dance. A commemorative postage stamp was also released that same day to mark the school’s anniversary.

Colegio Dom Amando was founded in 1943 by the diocesan bishop of Santarém, the Most Rev. Anselmo Pietrulla, OFM. The school was named in honor of the previous bishop, the Most Rev. Amando Bahlman, OFM, who also was the founder of a congregation for sisters. The Franciscans took care of the school until the Holy Cross Brothers arrived in 1951 at the request of the bishop who had heard of the quality of the Holy Cross Brothers’ educational institutions in the United States. 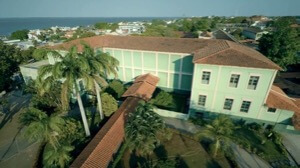 “The Dom Amando School was the great inspiration for the coming of the brothers of Holy Cross to Brazil,” said Br. Ronaldo Almeida, C.S.C., Superior of the District of Brazil. “It was through the need to run this college that Dom Anselmo invited the brothers of Holy Cross to serve as educators in the city of Santarém. Today, as we watch Colegio Dom Amando celebrating its 75 years, we see a school that is considered one of the most important in the Amazon Region.

“It is an honor for us, religious of the Congregation of Holy Cross, to be at the forefront of this educational work,” continued Br. Almeida, “and to know that we offer a quality education in harmony with the development of the faith and the Christian values ​​of our students.” 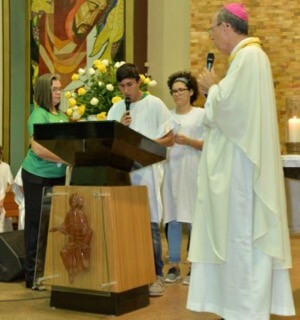 Br. Ronnie Lenno Silva, C.S.C., the Vocations Director and Assistant Superior of the District of Brazil, is a proud graduate of Colegio Dom Amando. He was present for the anniversary celebrations, which he characterized as a moment of great joy for the school, the city, and the Church communities.

In speaking about his alma mater, Br. Silva highlights “integral formation in the faith” and how “excellent academic formation walks side by side with the study of arts, sports, and cultural activities. The students love the school and usually they want to spend their time in extracurricular activities such as music, theatre and sports.” 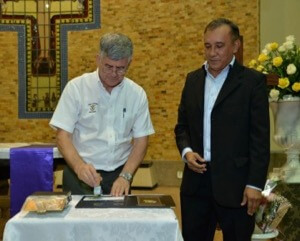 “Bearing in mind that the charism of the Holy Cross is to renew the Christian faith and regenerate society, that is, to promote and foster better times for society, all our actions must respond untiringly to the most urgent needs of the Church and of society,” said Br. Almeida. “In this sense the educational mission plays a very important role in the renewal and preparation of our children and young people to live and act in the contemporary world torn by the values ​​that generate inequalities, violence and injustice.

“Our founder, Blessed Basil Moreau, defended education as a work and means of resurrection, of reconstruction,” continued the Brazilian District Superior. “And without a doubt, the school mission can generate new lives for our students, provided they are offered the integral formation, considering the mind and the heart.”