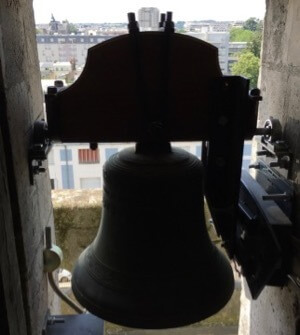 On Sunday, June 30, 2019, the Christian community at Notre-Dame de Sainte-Croix in Le Mans celebrated the blessing and dedication of a bell recently installed in the church loft.

The bell was a gift of the Marianites of Holy Cross to the International Shrine of Blessed Basile Moreau. It was manufactured in 1866 by the famed Bollée bell factory, and it had previously hung in the clinic of the Marianites in Précigné,

In keeping with Christian tradition, the bell was given a name, as well as a godfather and godmother. Fr. John De Riso, C.S.C., Pastor of Notre-Dame de Sainte-Croix and Rector of the International Shrine of Blessed Basile Moreau, chose the name “Louise” in honor of Louise (Pioger) Moreau, mother of Blessed Moreau. It was Louise who, with her husband, Louis, gave young Basile and his brothers and sisters the example of a life of prayer and of virtue, and a profound devotion to the Blessed Virgin Mary.

Serving as godfather was Monsieur Jean-Paul Joos, a devoted parishioner and friend of the religious family of Holy Cross. Sr. Jacqueline Brechotte, M.S.C., archivist for the Marianite Sisters, served as the bell´s godmother.

Fr. John expressed his particular gratitude to Sr. Ann Lacour, M.S.C., Marianite Congregational Leader, and to Sr. Thérèse Poupard, M.S.C., for the gift of the bell. He also offered words of thanks to donors from both France and the United States who contributed generously to its installation.

At the same Mass, the parish community also bid a fond farewell to Fr. De Riso for his six years of leadership at the Parish and Shrine. Attending the Mass were Br. Paul Bednarczyk, C.S.C., Vicar and First General Assistant of the Congregation, Fr. DeRiso’s parents, and his sister and her family. A picnic later followed in the church garden.

In his remarks at Mass, Br. Bednarczyk called Fr. De Riso a “true pastor.” He commended Fr. De Riso for having brought to Le Mans “a vision for the parish and Shrine that has become more real and tangible as seen in the church’s beauty today and in its closer connection to the spirituality and charism of Blessed Basile Moreau.”

Fr. DeRiso returned to the United States on August 2, where he has assumed his new assignment as Vocation Director of the United States Province of Priests and Brothers. Succeeding him as Director of the Shrine is Fr. Paul-Élie Cadet, C.S.C., who was appointed by Fr. Robert L. Epping, C.S.C., Superior General of the Congregation. He will be assisted by Fr. Joseph Gonsalves, C.S.C., of the Sacred Heart of Jesus Province of Bangladesh.