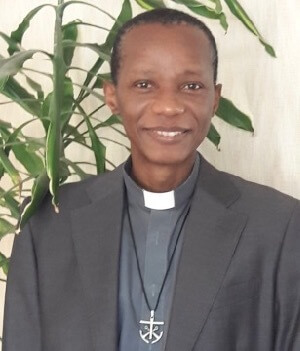 Fr. Cadet succeeds Fr. John DeRiso, C.S.C., who in 2013 was appointed the first rector of the Shrine, which is dedicated to promoting the legacy of the Congregation of Holy Cross’s founder.

Commenting on the appointment, Fr. Epping said, Fr. Cadet “is a prayerful man who has both the respect of his Province and the Vicariate of France. I am confident that he will continue the good work begun by Fr. DeRiso in building up the parish community and the Shrine of our Blessed Founder.”

Fr. Cadet is a member of the Congregation’s Our Lady of Perpetual Help Province in Haiti. He was ordained a priest on October 7, 2000. He started out working in the Congregation’s schools in Haiti. Then, after studies in Peru and Bolivia, he served in formation for the Province, first as the Director of the Pre-Novitiate Program and then later as Novice Master.

Currently, Fr. Cadet is completing theological studies in Paris, where he resides with the Holy Cross Community at Ensemble Scolaire Saint Michel de Picpus, Paris. He also serves as the superior of that local community.

Like his predecessor, Fr. DeRiso, Fr. Cadet will concurrently serve as the pastor of the Church of Notre-Dame de Sainte-Croix. He was appointed pastor by the Most Rev. Yves LeSaux, Bishop of LeMans, at the recommendation of Fr. Epping. 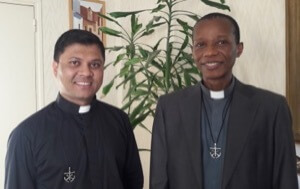 Fr. Cadet will be joined by Fr. Joseph Gonsalves, C.S.C., of the Sacred Heart of Jesus Province of Bangladesh, who will serve as Assistant Pastor and Vice-Rector of the Shrine.

The International Shrine to Blessed Basile Moreau, which is located at the Congregation’s Conventual Church of Notre-Dame de Sainte-Croix in LeMans, was inaugurated the weekend of September 20-21, 2014.

“The International Shrine of Blessed Basile Moreau aims to be a place of prayer, of welcome, and of evangelization, in service to both the Church in Le Mans and beyond,” said Fr. DeRiso, C.S.C., at the time of the inauguration. “Blessed Basile Moreau has a way to holiness and a way to the Lord to share with us. The Shrine of Basile Moreau, in addition to being a place of peace, also aims to make his way known. It will contribute to the greater glory of God through the sanctification of souls.” 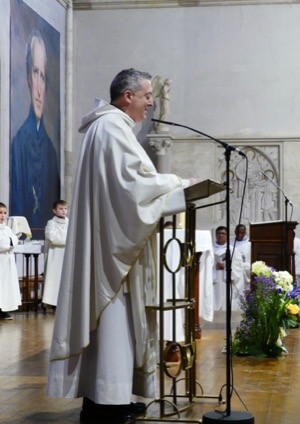 Through collaboration with the parish community that exists at Notre-Dame de Sainte-Croix, the International Shrine of Blessed Basile Moreau has developed and grown in its mission over the past five years.

Under the creative and tireless leadership of Fr. DeRiso, the number of pilgrims, including groups from Holy Cross apostolates around the world, has steadily increased. Prayer vigils, musical concerts, and other events have also increased among the local community and the wider Church in France their awareness of and devotion to one their native sons.

Having completed six years as the Shrine’s Rector, Fr. DeRiso will now return to the United States Provinces of Priests and Brothers, to which he belongs, to serve as Director of the Office of Vocations.