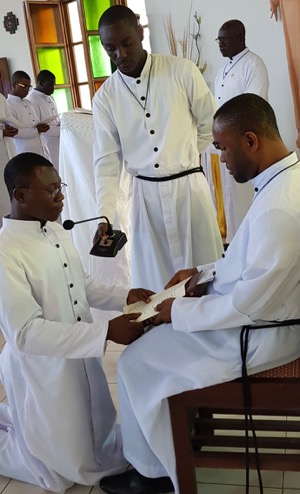 September 14, 2018, the Feast of the Exultation of the Cross, was a moment of grace for St. Brother André Novitiate in the District of West Africa in Ghana. Six novices made their First Professions of Religious Vows in the Congregation of Holy Cross.

The Mass of First Profession was held at St. Brother André Chapel at the District Center. So many Holy Cross religious, family members of the novices, friends, and well-wishers came to attend the First Professions that the chapel overflowed and some people were left to sit outside.

Fr. John Ghansah, SJ, a graduate of the Holy Cross Brothers' St. John's School, presided at the Mass. Br. John Badu Affum, C.S.C., the newly elected Superior of the District of West Africa, received the vows of the six novices.

Br. Affum was the Novice Master of this class of novices when they began their Novitiate year back in 2017. Then he was elected Superior of the District at the District Chapter in December 2017. At that point, Br. Joseph Tsiquaye, C.S.C., took over as Novice Master. Assisting during the year as assistants in the Novitiate were Brothers Joseph Annan, C.S.C., and William Tawiah, C.S.C. 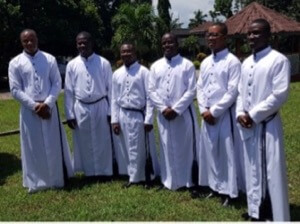 A celebratory lunch was held after the Mass and for family members of the newly professed and the Holy Cross religious. There was a great spirit joy and thanksgiving during the festive meal.

After a two week vacation, the newly professed will report to Dujaire House at the District Center to continue their initial formation.

Special thanks to Br. Paul Mensah, C.S.C., for assisting with this article.