October 2014 marked the 50th anniversary of the founding of St. Brendan's Parish in Kitete, Tanzania. The parish, which is located about two hours from the city of Arusha in the foothills that border Ngorogoro National Park, was originally founded by the Irish Pallottine missionaries in 1964. The Congregation of Holy Cross, through its District of East Africa (Kampala, Uganda), took pastoral responsibility for the parish in 2000.

“Every time I visit St. Brendan Parish I reflect on what their experience must have been like in those early years in Kitete for the Pallottine missionaries,” said Fr. Patrick Neary, C.S.C., Superior of the District of East Africa. “When they built their humble little parish church, they gave it the name of the legendary St. Brendan the Navigator, a great Irish missionary whose example must have encouraged and fortified them through many a trial and hardship. The seeds of faith planted there some 50 years ago by those first missionaries have born much fruit. “ 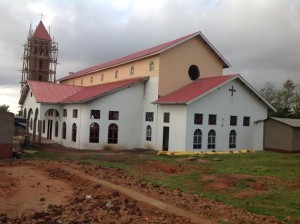 To celebrate its golden jubilee, St. Brendan's Parish decided to build a new church to serve as a home for the growing Catholic community in the area.

“The big mark for our Jubilee celebration was the new church,” said Fr. Prosper Tesha, C.S.C., Pastor of St. Brendan's Parish. “We could not finish everything we wanted to accomplish before the Jubilee Day, simply because of the short timeframe we had. I was so grateful that most of the church roof was on and the majority of it plastered. We also managed to put in window and door frames, paint, and put glass in some areas. Overall, our church looks beautiful.”

The Jubilee Celebrations were held on October 23 and 24. A large contingent came from Holy Cross Parish in Dandora, Kenya, to join in the festivities. In addition to many Holy Cross priests, brothers, and seminarians, the parish’s choir also came to participate in the celebrations.

On October 24, the Most Rev. Beatus Kinyaiya, Bishop of the Diocese of Mbulu, came to celebrate the Mass that was the centerpiece of the Jubilee Celebrations. Over 4,000 people came to the Eucharistic Celebration. 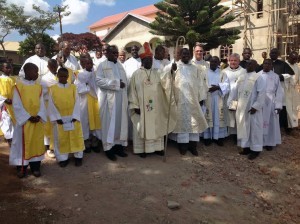 “The Mass was so colorful and gilded in song by our Parish Jubilee choir and Dandora Parish Choir,” said Fr. Tesha. “As usual, cows, goats, and chickens were slaughtered for the day. Everyone enjoyed the meals and was satisfied. After we had entertainment to close out our big day.”

Read more of Fr. Tesha's description of the Jubilee

Since the Jubilee Celebration, work has continued on the new church, and Fr. Tesha says the community expects the construction to be complete in February 2015. 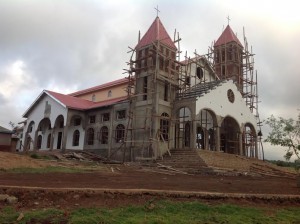 When completed, the new church is expected to cost around $170,000. Although the average yearly income in the parish is only $400, the parish was able to raise over $80,000 because many families generously pledged $37. The bulk of the remaining funds were raised from donors in the United States, as the Congregation’s District of East Africa is a mission of the United States Province of Priests and Brothers (Notre Dame, Indiana).

Holy Cross has been in East Africa since 1958 when the Congregation’s first missionaries arrived in Uganda from the United States. The Congregation’s mission in the region extended into Tananzia in 2000 when Holy Cross accepted pastoral responsibility for St. Brendan's Parish.

Read about Holy Cross in Tanzania

As in other parts of the world, parochial ministry is an essential part of the way the Congregation seeks to serve as Educators in the Faith in Uganda, Kenya, and Tanzania. 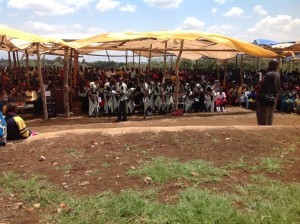 “Parish ministry remains the backbone of our ministerial work in East Africa, said Fr. Neary. "St. Brendan’s Parish is typical of all of our parishes in East Africa: committed to being amidst the very poor, providing an education in the Holy Cross tradition of educating both the mind and the heart, and serving united as brothers in Holy Cross—men with hope to bring, after the heart of our founder, Blessed Basile Moreau."

Special thanks to Angela Knight, Communications Manager of the United States Province of Priests and Brothers, for contributing to this article.