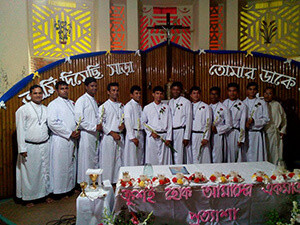 On Friday, August 5, 2016, the Congregation of Holy Cross in Bangladesh celebrated the First Professions of Vows of 10 novices at the Holy Cross Novitiate in Sagardi, Barisal. Of the men who professed their First Vows, four are members of the Society of Priests and the Sacred Heart of Jesus Province, and six are members of the Society of Brothers and the St. Joseph Province.

Besides the relatives of the newly professed, a good number of Holy Cross religious were present for the First Profession, as well as a number of diocesan priests and members of other religious communities. 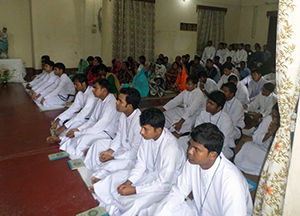 The Most Rev. Lawrence Subrato Howlader, C.S.C., Bishop of the Diocese of Barisal, was the main celebrant in the Mass of the First Profession. The Mass was followed by a banquet and a colorful cultural function in honor of the newly professed. All expressed gratitude for the work of Fr. Eugene Anjus, C.S.C., Novice Master, and Br. Saytta Purification, C.S.C., Assistant Novice Master, for their generous effort in preparing the novices for their First Profession.

Thanks to the fruits of the Congregation’s vocation efforts in Bangladesh, the following day, August 6, eight new novices were received officially into the Novitiate during a Mass. Three are from Sacred Heart of Jesus Province, and five from St. Joseph Province.

Bishop Howlader was once again the main celebrant at the Mass. In helping Br. Purification receive the new novices were a number of other Holy Cross religious, as well as members of other religious communities and the local diocese.