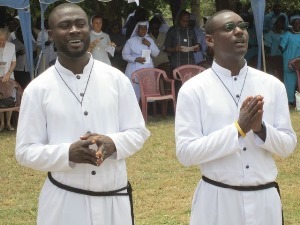 On Saturday, April 25, in Ghana, Br. Aristide Oben Biney, C.S.C., and Br. Francisco Gillette, C.S.C., made their Final Profession of Vows in the Congregation of Holy Cross.

The Mass of Final Profession took place on the grounds of the Holy Cross District Center in Brafoyaw, which serves as the headquarters for the Congregation’s District of West Africa (Cape Coast, Ghana). The Most Rev. Matthias Nketsia, Archbishop of Cape Coast, presided at the Mass, which took place on a beautiful, sunny day.

In his homily, prior to Br. Biney and Br. Gillette’s Final Professions, Archbishop Nketsia pointed out that religious life is a sign post reminding the world of the very life Christ came to live on this earth – that of a poor, chaste, and obedient servant who carries out the Father's mission. In answering God’s call to follow that same way of life, Br. Biney and Br. Gillette were becoming role models for the Church and world. As a result, said the archbishop, they must seek to be exemplary religious, reminding the people of their own commitment to God. 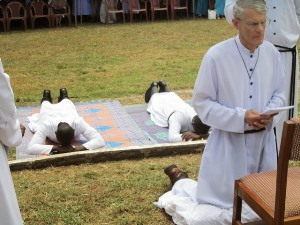 Following the homily, the two candidates for Final Vows were presented. After both stated their intent to profess Final Vows according to the Constitutions of the Congregation of Holy Cross, the Litany of the Saints was sung as the men lay prostrate on the earth. Then, after a concluding prayer, both men knelt one at a time before Br. Chester Freel, C.S.C., the Superior of the Midwest Province of Brothers (Notre Dame, Indiana), which oversees the District of West Africa, to profess the vows of poverty, chastity, and obedience.

As a sign of their Final Profession as religious brothers in the Congregation, Br. Biney and Br. Gillette received from Br. Freel a St. Joseph Medal to be worn with their religious habit. The medals were blessed by Archbishop Nketsia. Dating back to Fr. Jaques Dujarie, St. Joseph has been the patron of the Holy Cross brothers.

See a gallery of Final Vows from around the world 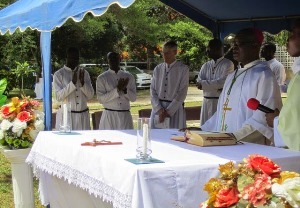 Br. Biney and Br. Gillette then shared a festive sign of peace with their brothers in Holy Cross and members of their families as the celebration of Mass continued.

Following the Mass, the celebration continued on the grounds of the District Center with a reception.

Special thanks to Fr. Robert Gilmour, C.S.C., for the photos.