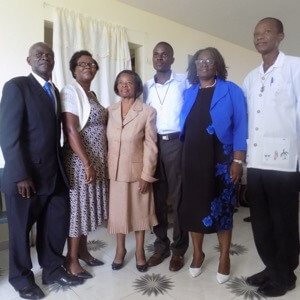 On Sunday, August 28, the Our Lady of Perpetual Help Province in Haiti celebrated the First Profession of Vows of Mr. Jose-Etnour Laine, C.S.C. Mr. Laine had just completed his year as a novice at the Holy Cross Novitiate in Cap-Haitien, under the direction of Fr. Paul-Elie Cadet, C.S.C., the Novice Master.

Receiving Mr. Laine’s First Vows of Poverty, Chastity, and Obedience was Fr. Eric Jasmin, C.S.C., Superior of the Our Lady of Perpetual Help Province. He also presided and preached at the Mass.

Like many of the vocations to Holy Cross in Haiti, Mr. Laine is a graduate of one of the Congregation’s schools, having graduated from College Notre-Dame du Perpetuel Secours in Cap-Haitien. There he was very active in the Youth Eucharistic Movement, which is a dynamic form of youth ministry in Haiti.

Read about the recent Ordinations in Haiti 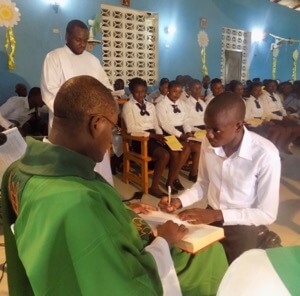 Following his First Profession, Mr. Laine will now continue his initial formation in the Congregation studying philosophy at the National Major Seminary run by the Haitian Bishops Conference in Port-au-Prince. He will live in the Congregation’s Scholasticate and Basile Moreau Residence in Port-au-Prince, along with the other temporarily professed seminarians in studies in Haiti.

This was Fr. Cadet’s last novice class at the Novitiate. Having completed seven years as the Novice Master from 2009-2016, he is now in Paris, France, studying for a Master’s in Theology at Centre Sevres with the Jesuits.

Learn about Holy Cross in Haiti

Fr. Keith Louidor, C.S.C., now has begun his work as new Novice Master, and on Thursday, September 1, he received six new novices into the Novitiate. They are part of a steady stream of vocations Holy Cross has enjoyed in Haiti. The six new novices had just completed their year of postulancy in Fort-Liberte in the Northeast of Haiti, where the Congregation administers a dicosean school. Fr. Jacquy Dagobert, C.S.C., served as their Postulant Director.