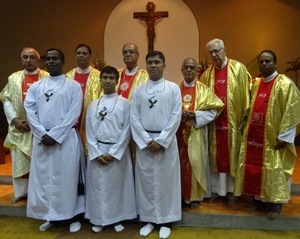 Last month, on Thursday, April 16, the Sacred Heart of Jesus Province (Dhaka, Bangladesh) celebrated the Final Professions of three of its men. Fr. James Clement Cruze, C.S.C., the Superior of the Sacred Heart of Jesus Province, received the men’s vows according to the Constitutions of the Congregation of Holy Cross in a Mass held at the Chapel of the Holy Cross Scholasticate in Rampura, Dhaka, Bangladesh. 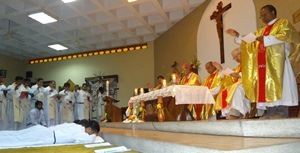 At the same time that it rejoiced in the Final Vows of these three men, the Sacred Heart of Jesus Province also celebrated the Silver, Golden, and Diamond Jubilees of members of the Province. Those celebrating 25 years of religious vows were Fr. Shanker Leonard Rozario, C.S.C., and Fr. Sushanto Anthony Gomes, C.S.C. Bishop Gomes, and Fr. Gilbert Lague, C.S.C., rejoiced in 50 years of religious life. Fr. Eugene Homrich, C.S.C., marked 60 years of priesthood. They were all recognized in the same Mass, after which there was a reception and cultural program, followed by dinner. 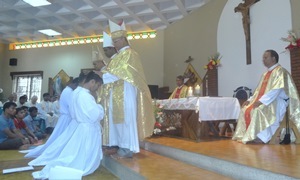 As with the Final Vows celebration, the Ordination Mass was held at the Chapel of the Holy Cross Scholasticate in Rampura and drew a large crowd, including almost 50 priests, 10 sisters, 20 brothers, and 200 seminarians and aspirants, as well as many lay people. In addition to Bishop Gomes, three other bishops were present: Bishop Atul D’Rozario; the Most Rev. Subrato Lawrence Howlader, C.S.C., Auxiliary Bishop of the Diocese of Chittagong, and the Most Rev. Sebastian Tudu, Bishop of the Diocese of Dinajpur.

Special thanks to Fr. Proshanto Cruze, C.S.C., for assisting with this article.