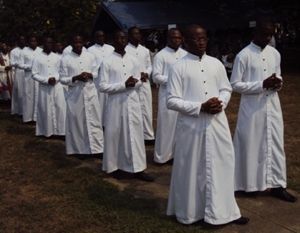 On Saturday, January 11, the Congregation of Holy Cross in Ghana celebrated the First Professions of 13 novices from the St. André Bessette Novitiate in Brafoyaw. All 13 of the newly professed are brothers and members of the District of West Africa. Their Mass of First Profession was held at the district’s center, also located in Brafoyaw, Cape Coast. Receiving their vows was Br. Daniel Dardoe, C.S.C., the Superior of the District of West Africa.

The profession ceremony of these 13 brothers marked the completion of their yearlong formation program at the Novitiate under the direction of the Novice Master, Br. J. Kofi Tsiquaye, C.S.C., and his assistant, Br. Joseph K. B. Annan, C.S.C. They had been received into the Novitiate in January 2013.

“There is something to be said for this group,” said Br. Tsiquaye. “They came from the four corners of the country, and they certainly made Holy Cross visibly present in the Cape Coast Metropolitan area with their apostolic outreach to the ministry sites and parish stations.” 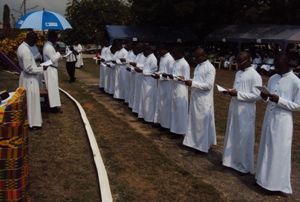 The 13 newly professed are now moving to the Br. Rex Hennel, C.S.C., Community in Sunyani, where they will continue their spiritual and academic formation in preparation for their future ministries.

Read news of other First Professions in Holy Cross 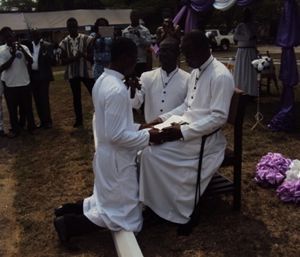