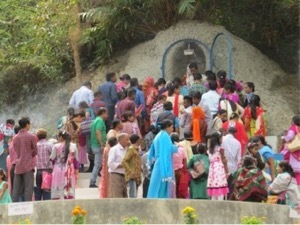 On February 11-12, 2016, thousands people gathered for an annual pilgrimage at the Miriam Ashram in Diang under Patia Upazila in the Chittagong District of Bangladesh. The Ashram (which is a place for prayer and pilgrimage) was founded by Servant of God Br. Flavian Laplante, C.S.C., in 1976 on property near the Holy Cross Brothers residence in Diang.

Tying into the Jubilee Year, the theme for this year’s pilgrimage was “Mary our Help of Receiving God’s Mercy”. The theme resonated deeply with all those who were present for the days of prayer at the Ashram.

See a timeline of the life of Servant of God, Br. Flavian Laplante, C.S.C.

The two-day program began with a pair of Masses on Thursday afternoon drawing over 5,000 people. The Most Rev. Subrato Lawrence Hawlader, C.S.C., Bishop of the newly erected Diocese of Barisal, presided and preached at the second Mass. In his homily, Bishop Subrato said, “People coming from all walks of life came here have individual or personal intention to Mary our Mother and she is interceding for us to the good Lord to fulfill our intentions. We have just started the Lent season and we too walk with Mary our mother to the Calvary with Jesus.”

At 9:00pm, following dinner, a Night Vigil began which included a penitential service, individual confession, and a beautiful candle light procession. At midnight, two short films were shown on the life of Saint Maria Gorette and Br. Laplante. The Night Vigil concluded with a short skit written and performed by the students of the Christian Students Organization from the city. 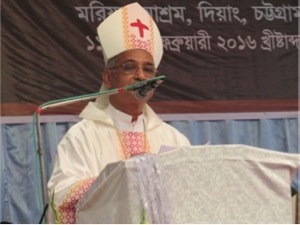 The second day began with Mass at 9:30 a.m., with a huge crowd sitting under the shade prepared in between the hills near the Grotto of Mary and the Ashram. The main celebrant was the Most Rev. Moses M. Costa, C.S.C., Bishop of the Diocese of Chittagong. There was a beautiful procession in the Mass that included the servers, a group of dancers, Bishop Subrata, and 15 concelebrating priests. There were also 19 Holy Cross brothers in attendance, as well as many sisters, in addition to over 8,000 devotees of Mother Mary and of Servant of God Br. Flavian.

In his homily, Bishop Moses said, “We are here to show our respect, devotion, honor and offer our special intention to Mary the mother of Diang Ashram that she will fulfill our various intention and supplication. She is the first one who experienced God’s Mercy being faithful to God. We should also be faithful to our Merciful God and the teaching of Jesus through Gospel. Pray to Mary everyday the rosary prayer faithfully in the family.”

The days of prayer and pilgrimage came to an end with a Thanksgiving Speech by Br. Joachim Ratan Gomes, C.S.C., the Director of Miriam Ashram and the Coordinator of the Tirtha (Pilgrimage) Executive Committee. There were many people to thank from those who helped prepare the food and the annual pilgrimage booklet, to all those people who served on the executive committee and various sub-comittees. All of their hard work and service made the pilgrimage such a spiritual and physical success. 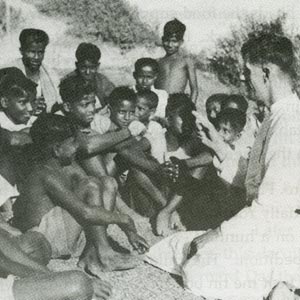 Br. Flavian Laplante, C.S.C., was born Doria Laplante on July 27, 1907, in St.-Louis-de-Richelieu, Quebec, Canada. After meeting the Holy Cross brothers at school, he entered the Congregation at the age of 16. On August 15, 1923, he received the religious habit and took the name Flavian. Just over five years later, after completing his Novitiate and studying at St. Joseph’s Scholasticate, he professed Final Vows on August 16, 1928.

In Bangladesh, he first worked in the Congregation’s schools until May 1942 when the Japanese Army started air raids on Chittagong, and Br. Flavian went there to assist. He remained in Chittagong in 1943 and 1944 when a severe famine hit the land so he could help tend to the hungry and sick. Br. Flavian worked principally with the Hindus, who were considered at the bottom of society. It was during this time that he met the fishermen to whom he eventually devoted most of his life and ministry after the War, leading many development projects.

Pray for the beatification of Severant of God, Br. Flavian Laplante, C.S.C.

Br. Flavian was declared a Servant of God on February 13, 2009 – the Feast of Our Lady of Lourdes – by Most Rev. Patrick D’Rozario, who at the time was Bishop of Diocese of Chittagong. His cause remains in its initial stages.

Thanks to Br. Bikash Victor D’ Rozario, C.S.C., for contributing to this news article.