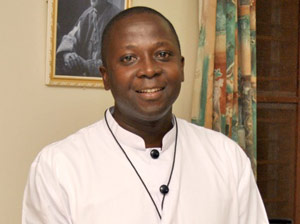 The Congregation of Holy Cross, District of East Africa, annouced today that Br. Cleophas Kyomuhendo, C.S.C., has been selected as the next Headmaster of Holy Cross Lake View Senior Secondary School, Jinja, Uganda. The decision had been made in concert with the school's Board of Directors. The assignment will officially take effect on July 1.

Kyomuhendo has a Bachelor in Philosophy from Consolata Seminary Institute of Philosophy (1994), a Post-graduate Diploma in Education from Makerere University (1996), and an Master of Business Administration from Catholic University of Eastern Africa in Nairobi, Kenya (2008). 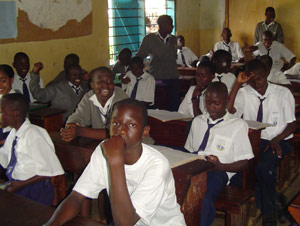 In between his studies, he made his Profession of Final Vows in the Congregation on August 8, 1996. Immediately prior to this appointment, he had been serving as the Deputy Headmaster for Administration and the Director of Development at Lake View School.

Founded in 1993 by Rev. Robert Hesse, C.S.C., in an abandoned one-room schoolhouse, Holy Cross Lake View has grown to over 700 students, with plans to expand to 1,200. The school has earned a reputation in Uganda for its strong academics. Its students score highly in the national examinations, even though many of them come from modest backgrounds both financially and educationally.

Kyomuhendo is the third Holy Cross brother from East Africa in just over a month to be named to a leadership role at one of the Congregation's secondary schools in the region. In February, the new Board of Governors for St. Joseph Hill Senior Secondary School in Kyarusozi, Uganda, selected Br. John Bailanda, C.S.C., as its new Headmaster. That appointment, which is a three-year term, took effect March 1. The Board also appointed Br. Patrick Tumwine, C.S.C., as its chairperson. That is also a three-year appointment.

Explore the history and current work of Holy Cross in Uganda