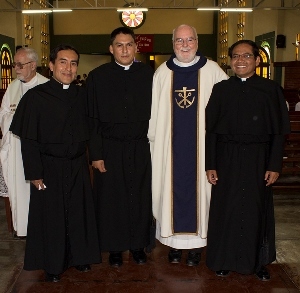 Following its 14th District Chapter, the Holy Cross community in Peru joined together with the sisters of the two other Holy Cross congregations in the area and hundreds of lay collaborators and family members to celebrate the perpetual vows of three of its religious.

Julio Arias Valdivia, C.S.C., Elmer Caro Aguirre, C.S.C. and David Olarte Carrasco, C.S.C., professed their Final Vows on January 31 during a Mass celebrated at San Francisco de Asís Chapel of El Señor de la Esperanza Parish in Canto Grande. The parish is staffed by the Congregation of Holy Cross and forms the focal point of the Congregation’s mission in Peru. 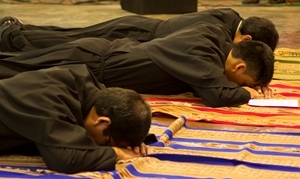 “Their vows were celebrated by an enthusiastic and adoring congregation, among whom all three have served at one time or another,” said Fr. O’Hara. “Their families had traveled great distances to join them. It was a fitting and providential conclusion to two very important weeks in the life of Holy Cross in Latin America.” 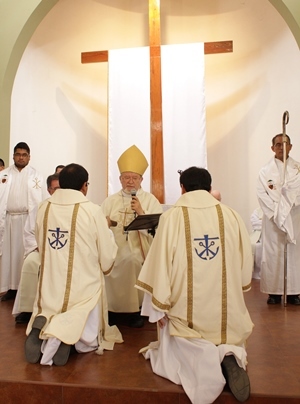 The day following their Final Profession, February 1, Julio and Elmer were ordained deacons by the Most Rev. Norbert Strotmann, M.S.C., Bishop of the Diocese of Chosica. David, who is finishing a pastoral year in Canto Grande, will return to Santiago, Chile, this month to reside at the Congregation’s International House of Formation there and finish his coursework at the Catholic University. He will be ordained a deacon at a later date.

Julio and David grew up in El Señor de la Esperanza Parish, while Elmer was raised near the Holy Cross parish in Chimbote. All three studied humanities and philosophy at the Jesuit Ruiz de Montoya University in Lima and will receive their Theology Degree from the Pontifical Catholic University of Chile in Santiago.

Special thanks to Fr. Donald Fetters, C.S.C., for contributing to this story.