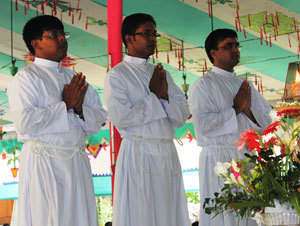 The Mass of Final Profession was held on the basketball court of the Scholasticate in Banashree Prokolpa, Rampura, Dhaka, due to the large crowd that attended. Among the crowd were well over 50 Holy Cross priests, brothers, and sisters. There were also many diocesan and other religious order priests in attendance. 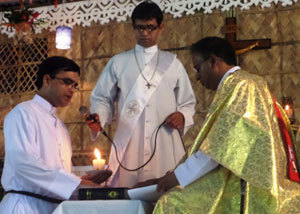 The Most Rev. Subrato Lawrence Howlader, C.S.C., Auxiliary Bishop of Diocese of Chittagong, was the main celebrant for the liturgy. Rev. James Clement Cruze, C.S.C., the Superior of the Sacred Heart of Jesus Province, received the Final Vows of the three religious, all of whom are members of the Province.

Some of the more moving moments in the joyful celebration came through the participation in the liturgy of the parents, other relatives, and friends of the three men who made their Final Profession. Following the Mass, there was a lively cultural program that led into a festive dinner.

Read the vocation stories of priests and brothers in Holy Cross 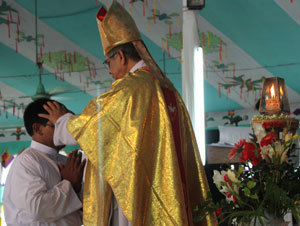 The following day, October 19, Costa, Gomes, and D’Rozario were all ordained to the deaconate by the Most Rev. Theotonius Gomes, C.S.C., Auxiliary Bishop of the Archdiocese of Dhaka.

Deacon Sumon Peter Costa, C.S.C., is the youngest son of Augustine Costa and the late Magdaline Pereira from Toomilia Parish in Village-Bangalhawla, Dhaka. He was born on December 16, 1981, and professed his First Vows September 16, 2006. Costa will continue his theological studies through December, and then he will go a parish for his deaconate ministry.

Deacon Anthony Pronoy Gomes, C.S.C., is youngest son of Isidore and Clara Gomes and is from Hashnabad Parish inVillage-Hashnabad, Dhaka. He was born on May 31, 1980, and professed First Vows on September 15, 2007. He will continue his studies through June 2014. 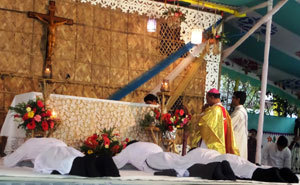 Deacon Samir Peter D’Rozario, C.S.C., is the eldest son of Xavier and Magdaline D’Rozario. He comes from Hashnabad Parish in Village-Nayanshree, Dhaka. He was born on January 26, 1981, and professed First Vows oMay 19, 2006. He will continue his theological studies through December, and then he will go a parish for his deaconate ministry.