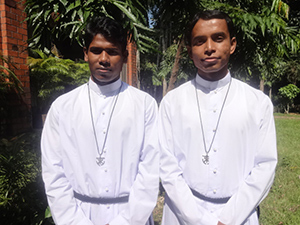 On November 1, at the Holy Cross Novitiate in Sagardi, Barisal, Bangladesh, two novices made their First Profession of Vows in the Congregation of Holy Cross. Mr. Tias Augustine Gomes, C.S.C., and Mr. Prodip Paul Minj, C.S.C., joined their two Novitiate classmates who made their First Profession back on August 1. Gomes and Minj began their Novitiate, and thus professed their vows, three months later than their classmates due to their Bachelor of Arts exams. All four are members from the Sacred Heart of Jesus Province (Dhaka, Bangladesh).

Explore a vocation in Holy Cross

The vows of poverty, chastity, and obedience professed by Gomes and Minj were received by Fr. James Clement Cruz, C.S.C., the Superior of the Sacred Heart of Jesus Province.

Presiding and preaching at the Mass of First Profession was the Most Rev. Subrato Lawrence Howlader, C.S.C., Auxiliary Bishop of the Diocese of Chittagong.

In his homily, Bishop Howlader said, “Family is the root and foundation for vocation and call. The elders in the family help their sons and daughters to understand this call with full confidence. We need to listen to them but not to ignore them.” 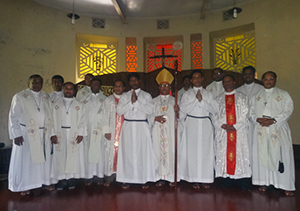 Present at the liturgy were parents and relatives of the two novices, as well as many Holy Cross priests and brothers, as well as several local religious sisters. The mass was followed by a short program in which the newly professed were congratulated for their brave and firm decision to become stewards of the vineyard of God. The program ended with a fellowship meal.

Gomes and Minj have now joined their classmates at the Rampura Scholasticate where they will continue their formation to serve as religious priests in the Congregation by starting philosophy courses at Banani Major Seminary in February.

Special thanks to Br. Kajol, C.S.C., Br. Bikash, C.S.C., and Fr. Proshanto Nicholas, C.S.C., for contributing to this report.