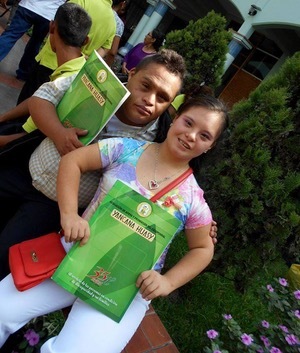 Great attendance and plentiful joy marked the two-day celebration in May of the 35th Anniversary of Yancana Huasy in Lima, Peru. Founded and administered by the Congregation of Holy Cross, Yancana Huasy is a unique ministry that helps integrate poor families with members with mental and physical disabilities into the wider community.

“This is an important moment to celebrate all that this institution has been doing in Peru, and specifically in San Juan de Lurigancho, for all the families with children faced with disabilities,” said Fr. José Ahumada, C.S.C., Superior of the Districts of Peru and Chile. “The experience and credibility that Yancana Huasy has obtained its 35 years of work provide a very important voice for the transformation of social policies, public organizations, and even the practices within the Catholic Church itself.”

In keeping with Yancana Huasy’s mission of educating and integrating, the celebration centered on a Conference entitled “Challenges and Tasks for the Evangelization of People in the Condition of Disabilities and Their Families.” The conference drew pastoral ministers not only from Peru, but also from neighboring Chile, where the Congregation also serves. In attendance was the Most Rev. Norberto Strotmann, Bishop of the Diocese of Chosica, who encouraged the participants to keep dialoguing and supporting one another in order to open up new concrete pastoral possibilities.

The second day focused on the professors of Yancana Huasy and other professionals sharing the best practices they have developed to improve the attention and quality of life of the children they serve. Topics included “Pedagogical Strategies for Attending Children with Severe Disabilities” and “Management of Postural Day and Night Care for People with Motor Deficits.” These topics, as well as the whole conference, was very well-received by those in attendance.

One of those able to attend the celebrations was Yancana Huasy’s founder, Fr. Daniel Panchot, C.S.C., who currently serves as the Pastor of San Roque Parish in Peñalolén in Santiago, Chile.

“Without wanting to be sentimental or overly pious, sincerely I believe that ‘Yancana Huasy’ has been a ‘work of God’ and of the Congregation,” said Fr. Panchot. “The truth is that there was no plan or project when neighbors with physical handicaps from the urban neighborhood of ‘Huáscar’, asked my help some 35 years ago. One early evening in the middle of the week in May or June of 1981, a group of five or six handicapped persons, mostly with disabilities of walking, came to the little room, where the future pastoral Center 'Mártires Latinoamericanos' would someday be, to ask for help.” 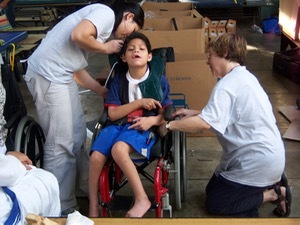 From that initial meeting, contact was eventually established with Cáritas Lima, which helped secure support from the Ministry of Education for the “Señor de la Esperanza” Project, which continues to this day. Gloria Merino was the first director of the project.

“Time and again different situations and contacts gave new vision and new possibilities to this work. Really, many times things of Providence solved problems or opened new horizons. Humanly speaking, many things should not have happened,” said Fr. Panchot.

Additional support came from Holy Cross institutions in the United States and Canada. Many other Holy Cross religious were critical in the ministry and growth of Yancana Huasy as well, including (now) Bishop Arthur J. Colgan, C.S.C., Fr. David Farrell, C.S.C., and Sr. Catherine Poirier, C.S.C.

“As a true work of Holy Cross, Yancana Huasy has depended on the vision, the creativity, the generosity, the determination and perseverance of an army of devoted lay people,” said Fr. Panchot. “The question in not, who founded Yancana Huasy, but what people founded it, and the answer is, the very people themselves, with handicaps, the members of their families, members of Holy Cross, and many, many dedicated lay persons, all inspired by Our Lord.”

Today, Yancana Huasy welcomes and serves daily almost 500 children in its diverse programs. Annually, it serves close to 5,000 people, with 90 percent of them being under the age of 18. 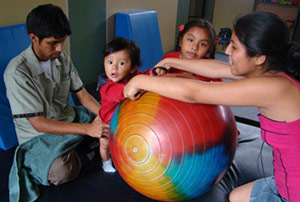 “I bring with me the faces and names of the children, youth, and adults with whom I have worked,” said Mr. Antonio Wanderley, C.S.C., a seminarian with the District of Brazil who served in Yancana Huasy during his Novitiate. “Their way of seeing and living has made a change in my way of seeing and accepting not only them, but also myself. Many times we think and frame it in a standard of normalcy, but we also have our disabilities, including ones that a lot of the time they do not have, such as a lack of love, attention, respect, and care for our brothers and sisters. I thank God for the opportunity I was given to be a part of the life of each person and family in Yancana Huasy.”

“The service that Yancana Huasy gives to these families, who many times feel lonely and helpless for not being understood and heart should fill us with joy,” said Mr. José Antonio Patrón, Director of Yancana Huasy. “Without a doubt, it is the visible face of the God of Love.”