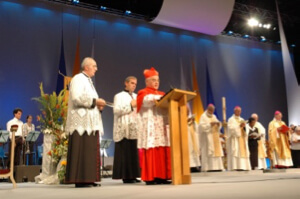 Around the world, the Congregation of Holy Cross is gearing up to celebrate the 10th Anniversary of the Beatification of its founder, Blessed Basile Moreau. It has already been 10 years since Cardinal Jose Saraiva Martins, Prefect of the Vatican Congregation for Saints' Causes, on September 15, 2007, read the Apostolic Letter of Pope Benedict XVI declaring that Venerable Basile Moreau "may be called Blessed."

“My first thought is thanksgiving,” said Fr. Robert L. Epping, C.S.C., Superior General of the Congregation, when reflecting back on the beatification. “The experience of the beatification ceremony in LeMans was magnificent. The celebration in the civic center was incredible for its joy, its splendor, its music, excitement and happiness. The gathering a numerous religious from the four Congregations and from many parts of the world was awesome; a family gathering of unusual proportions." 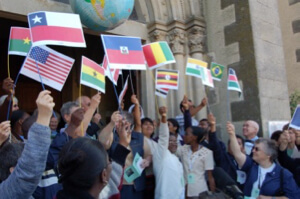 The events surrounding the Beatification began on Friday, September 14, with the ringing of a bell and a prayer of thanksgiving in the plaza of St. Augustine’s, the church in Fr. Moreau’s hometown of Laigné-en-Belin. Keeping with French traditions, the mayor hosted those gathered for champagne in his garden, and then there was a picnic hosted by the townspeople.

Later that same day, many of the pilgrims gathered at the Church of Notre-Dame de Sainte-Croix in Le Mans, which was built by Fr. Moreau as the symbol of unity for his religious family of Holy Cross. Today the Church is home to the International Shrine to Basile Moreau.

Read about the Congregation's history

The Beatification liturgy took place on September 15, the Feast of Our Lady of Sorrows, the patroness given by Fr. Moreau to his religious family. The liturgy was held in the Centre Antares, a sports arena in Le Mans, France, which is where Blessed Moreau founded the Congregation in the neighborhood of Sainte Croix. Bishop Jaques Faivre of LeMans presided at the Mass, which drew not only a large of Christians from the surrounding region, but also many Holy Cross priests, brothers, and sisters from 18 countries around the world. 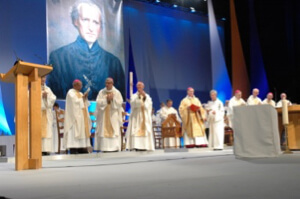 "The high point of the Beatification was the dramatic unfurling of the tapestry of Blessed Basil Moreau, CSC," related Fr. Willy Raymond, C.S.C., one of the Holy Cross religious who was present. "The thousands gathered for the event gasped audibly and then cheered loudly to ratify Pope Benedict's solemn declaration beatifying Father Moreau."

A special reception and dinner, attended by 1,000 people, was held later that day, following the Beatification.

The next day, September 16, Holy Cross religious and their friends and colleagues gathered at a Mass of Thanksgiving held at the St. Julien Cathedral of LeMans, the church where Fr. Moreau had been ordained. Cardinal Theodore McCarrick, Archbishop Emeritus of the Archdiocese of Washington, D.C., presided and preached at the liturgy.

Now, 10 years later, Holy Cross religious and their friends and colleagues are gathering once again—this time in various places around the globe—to give thanks once again for Fr. Moreau’s beatification, as well as to continue praying for his canonization.

“The goal of the 10th anniversary celebration is to make known the life, works, and the charism of Fr. Moreau more profoundly to confreres in the Congregation and to the people with whom we associate in our ministries,” said Br. Ripon James Gomes, C.S.C., the Third General Assistant and the Chair of the Congregation’s Commission on Consecrated Life, which is overseeing the anniversary celebrations.

To mark the anniversary, a special Novena Prayer to Blessed Moreau is being prepared to lead up September 15. In addition, logos and banners have been made to draw attention to the anniversary, as well as the various liturgies, prayer services, and events that will be held by the Congregation’s schools, parishes, and other ministries in celebration.

“We hope to spread the enduring charism and spirituality of our Founder among our collaborators and help confreres to articulate our heritage and charism in simple and precise language for all to understand,” said Br. Gomes. “I do believe that it will come to true.” 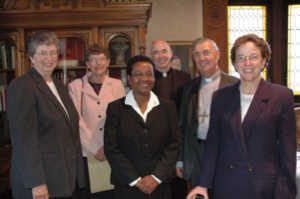 While these events are certainly being planned in a spirit of thanksgiving for what happened 10 years ago, the even greater spirit behind them is the hope for the future, and how the life and witness of Blessed Moreau can continue to speak of the faithfulness of Divine Providence and the victory of Christ’s Cross in the world today.

“My second thought is about hopefulness,” said Fr. Epping. “Fr. Moreau is in heaven, and we have received a sign of his holiness. It gives us confidence that our consecrated life is a way of grace and holiness. It is a gift of the Church to us to be able to celebrate his beatitude in a limited way, making us yearn for the day to celebrate with the whole Church.

“It is hard to determine the effects of his beatification at this close range,” the Superior General continued. “Some interesting things that have begun to appear include the development of the Shrine at Notre-Dame-de-Sainte-Croix in Le Mans, greater interest in the life and vision of Fr. Moreau, a willingness to seek greater unity, and new openness to his missionary spirit.” 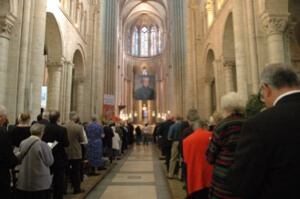 Fr. Epping concluded: “My greatest hope is the renewal of our own consecrated life according to his vision for the Congregation. At the heart of Blessed Basile Moreau’s vision is our union, ‘a sign in an alienated world: men who have, for love of their Lord, become closest neighbors, trustworthy friends, brothers.’ … We can only pray that, as our filial love and respect increases, so will the blessings of vocations and a missionary spirit flourish even more among us.”