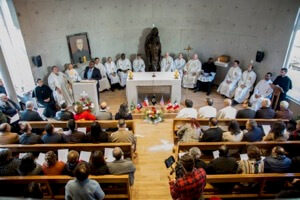 On Saturday, May 20, Fr. Robert L. Epping, C.S.C., Superior General of the Congregation of Holy Cross, presided at the dedication of the new Holy Cross House of Formation in Santiago, Chile. The Santiago house of formation serves an international community, with men in formation coming from Brazil, Chile, Haiti, Mexico, Peru, and the United States.

“Today we are gathered here because we are beginning or inaugurating what was, at one time, a dream of older religious that has now become reality,” said Fr. Epping in his homily during the Mass. “This new House of Formation must become an icon that points to something well beyond and larger than itself.

"Hopefully the vision it provokes in the young religious who will live here and study here, who will be formed here, will be one that drives them to fulfill a discipleship and apostleship that will change their lives and the world of the future,” he added.

Given its international nature and mission, the inauguration of the Holy Cross House of Formation drew an international group of Holy Cross religious. Both Fr. Thomas J. O’Hara, C.S.C., Superior, and Fr. Richard Wilkinson, C.S.C., Vicar, of the United States Province, the sponsoring province of the Congregation’s mission in Chile, were present, as was Fr. Pepe Ahumada, C.S.C., Superior of the District of Chile and the District of Peru. 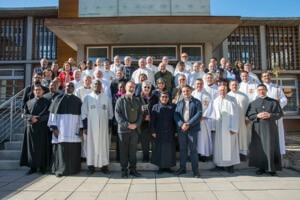 Representing the Holy Cross sisters at the Dedication, in addition to the local community of sisters, were: Sr. Noyli Rios, C.S.C., and Sr. Leia Finnerty, C.S.C, both of whom came from Perú.

See more pictures from the Dedication

The inaugural festivities began on Thursday, May 18, when the Cardinal Archbishop of Santiago, His Eminence Ricardo Ezzati, came to consecrate the house of formation’s new chapel, which is dedicated to Nuestra Señora de Santa Cruz (Our Lady of Holy Cross). 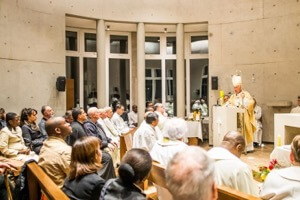 The seminarians proposed the name for the chapel after a communal discernment. They drew their inspiration from the Congregation’s conventual church in LeMans, France, Notre-Dame-de-Sainte-Croix, which Blessed Basile Moreau, the Congregation’s founder, intended to be a sign of the community’s unity. Since Moreau, Marian devotion has been an important part of Holy Cross spirituality, and it is also a central part of most Latin American popular piety.

The Consecration began outside the chapel doors, with the architects, Vicente Gumucio and Daniela Cortes, and the District of Chile Administrator, Fernando Torres, entrusting the chapel to the Archbishop.

Then the Cardinal gave the keys to Fr. Andrew Gawrych, C.S.C., Director of the House of Formation; Br. Edson Pereira, C.S.C, Assistant Director; and Fr. Daniel Panchot, C.S.C., Formation Staff, who opened the doors. The Cardinal then led the community into the chapel. 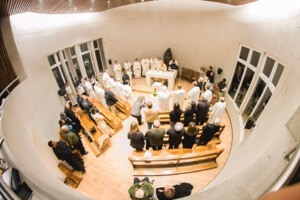 In his homily, Cardinal Ezzati spoke about how the beautiful new house of formation, built at a time of dwindling vocations, was a great sign of hope, not just for the Congregation of Holy Cross, but for the wider Church. He encouraged the men to continue to deepen their personal relationship with Jesus, with Mary as their guide, so that they could truly be men with hope to bring.

Following the homily, after invoking the intercession of the saints, Br. Donald Kuchenmeister, C.S.C., presented relics of Blessed Basile Moreau and St. André Bessette, the Congregation’s first saint, to Cardinal Ezzati to be installed in the altar. 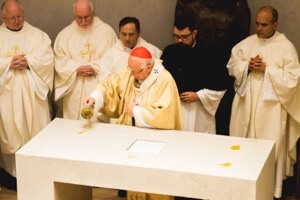 Then, after praying Prayer of Consecration, Cardenal Ezzati anointed the altar with the Sacred Chrism. Then Fr. O’Hara, Fr. Ahumada, Fr. Jasmin, and Fr. Fetters anointed with Sacred Chrism four marble crosses hung on the chapel’s walls for the dedication. As representatives of Holy Cross communities in Chile, Haiti, México and the United States, their participation symbolized the international nature of the house and its mission.

The altar was then incensed, decorated, and lit with candles for the first celebration of the Eucharist in the Chapel.

The Consecration of the Chapel on Thursday, and the dinner that followed, were an intimate celebration, attended mostly by Holy Cross religious. 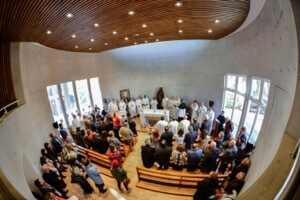 The dedication on Saturday, on the other hand, was a chance to celebrate and give thanks with the wider, extended Holy Cross family. Representatives from the construction company Polonesa, the architects, the designers, and the technical inspection team were all on hand.

Also present were representatives from all the Holy Cross apostolates in Chile, as well as many of the spiritual directors, tutors, psychologists, professors, and other professionals and ministers who accompany the men in formation.

“We are happy to share with you this grand day,” said Fr. O’Hara in his remarks. “Without a doubt, this beautiful building is a sign of [the United States Province’s] commitment to the District of Chile. But we are not committed to a building, as important as it is. Much more important is our commitment to the members of the Congregation that will live and study here. 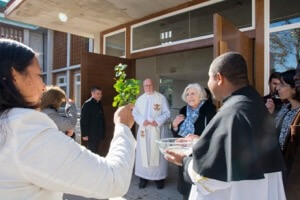 “The men who come from Chile, Peru, Brazil, Haiti, the United States and other countries are going to call this place their house, their home,” he continued. “We believe in you all, our brothers, and we pray that Our Lady of Holy Cross cares well for you.”

Following the Mass, the assembly split out to six separate locations in the house to celebrate rites of blessing. The decision was made to bless and dedicate the house in this manner, so that more people could participate in the blessing of the house and truly feel a part of its extended community.

“On Thursday, Cardinal Ezzati said in this chapel that this new house is a big sign of hope,” remarked Fr. Gawrych, in giving the instructions for the blessing. “We hope it is a sign of hope for us and for you, that despite our own personal weaknesses, the weaknesses of the Congregation, and the weaknesses of our faith community, the Church, God is not finished yet with his people. He still has marvels to work for us. We in Holy Cross—together with all you—hope to be God’s collaborators in the great work he wants to bring to fruition. 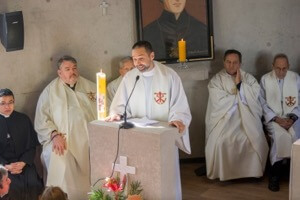 “For that reason, the great sign of hope for us in Holy Cross is you all—you all assembled here with us today to pray and give thanks, you all who walk with us in our vocations and collaborate together in the Church. Together we hope to continue crossing borders of every sort, so that God is known, loved, and served.”

At each location, the invited guests—all friends and collaborators of Holy Cross and specifically the House of Formation—read a short reading, recited a responsorial psalm, and led a short litany of the saints before the priest implored the blessing of God. Then everyone assembled sprinkled Holy Water on the walls of the building.

“The walls that were blessed on Saturday with Holy Water will shelter people of different nationalities and cultural and social realities, but drawn together by Jesus Christ and his Mother to put themselves at the service of the Church,” said Milena Schublin, Vice-Rector of St. George’s College , one of the many present for the Dedication. “To participate in the blessing of the International House of Formation was to experience one more time the charism of the Congregation, the fraternity among the priests, brothers, and lay men and women, and our common commitment to serve the Church.” 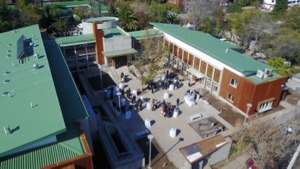 Following the blessings, the guests were able to explore the house while enjoying appetizers and beverages in the House of Formation’s main plaza, on what was a truly beautiful late fall day in Santiago.

The new Holy Cross House of Formation has 20 rooms for men in formation, as well as four staff rooms and two guests rooms, all of which are in the same wing. The other wing of the building houses the community spaces, including a living room, dining room, kitchen, classrooms, offices, a conference room, and even a small workout room.

The heart of the new House of Formation is the library and chapel, which are literally located in the center of the building, in a hallway that connects the two wings.

Read about the blessing of the building's cornerstone in 2016

"These recent celebrations in Chile were lived in faith," said Fr. Jasmin. "In this sense, they should not be considered a leap into the unknown. Preferably, they are the tangible and palpable sign of a secure investment in order to guarantee the future of the Congregation of Holy Cross in Chile in particular and throughout Latin America in general. 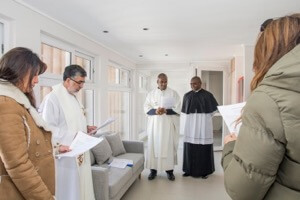 "This new building for the reception of young people for initial formation in consecrated life in the Holy Cross has as its main and primary objective to be a center of human life and growth,” he continued. “We hope and believe that God will bless the Congregation by sending strong vocations to perpetuate the work and spirit of our founder, Blessed Father Basile Antoine-Marie Moreau, here and everywhere else where Holy Cross does ministry. We must pray fervently and work hard to make this dream come true in the daily lives of our lives."

To be sure, much work remains on the new House of Formation. The formation community was only able to move the week before the Dedication, and workers continue to put on the finishing touches. In a few weeks, work will begin on the landscaping.

The greater work of the Holy Cross House of Formation, however, as Fr. Epping, noted, is just beginning. It is the work of converting this beautiful new house into a true home—a home where brothers live together in unity, a home where God dwells in their midst. 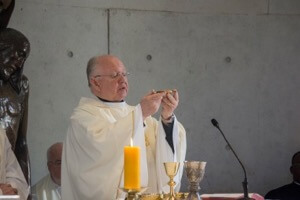 This was the Superior General’s charge to the men in formation: “Our holy Founder, Blessed Basil Moreau gave us this community of Holy Cross, and by his own life and his personal suffering he taught us what is most dear to us. That as you live happily and gracefully in this place, keep in your heart and on your lips the motto he gave us: Ave Cruz, Spes Unica (Hail the Cross, Our Only Hope). Like all the saints do, accept the crosses in your life; they are your hope. Your dreams and visions may not always come true, but your cross carried in fidelity will always bring in its shadow a rising.

Learn about the Congregation's motto and spirituality 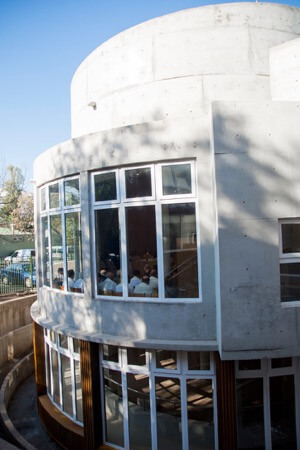 “That is why we sit today in the Chapel dedicated to Our Lady of Holy Cross, Notre Dame de Sainte-Croix, Nuestra Señora de Santa Cruz,” Fr. Epping continued. “She was given as gift to us too. The Lord entrusted us to her care and she to ours. She is dear to us as the Mother of Sorrows which she lived from the moment of that first unimaginable vision of the angel through the darkness of that awful Friday to be a mother. But she was faithful as we must be. And it is at her knee that we learn just how that is done.

“Be faithful sons to our splendid Mother. She is here in the center of your home. She will be your heart for she is the one, most of all, who will mark your house as a true home,” said Fr. Epping.

The pictures for this article come from Fabiola Torres and the other photographers of Monster Studio en Chile.